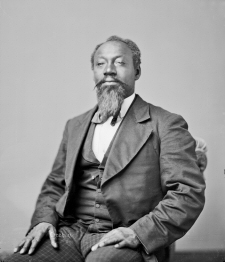 Silas Jefferson, also known as Ho-tul-ko-micco –“Wind Clan chief” — was born in 1835 at Taskigi Town (or Tuskegee) in the Old Creek Nation. His parents were Betsey and Jeffery Manac (McNac).  Jefferson emigrated with his parents to the Creek lands in the Indian Territory in 1838. He enlisted in the First Indian Home Guard Regiment (Co. I) during the Civil War and after the war became very involved in politics. He served several terms in the Creek House of Warriors representing Taskigi Town. He also served as one of Chief Locha Hacho’s advisors (Creek chief 1875-1876, impeached and removed from office in 1876 by the Creek Council) and was also close to Chief Isparhecher (Creek Chief, 1895-1899).

In 1879 Jefferson ran as a candidate for 2nd Chief on the Loyal Party ticket with Isparhecher, but the two candidates dropped out of the race after the Loyal Party withdrew from electoral politics and set up their own government at Nuyuka Town west of Okmulgee.

During the Green Peach War (1882-1883), Silas Jefferson abandoned the Loyal Party after Isparhecher advised his followers to take up arms against the Creek Constitutional government. After the outbreaks that summer, he worked diligently to bring the warring factions together. He remained involved in Creek politics until tribal dissolution in 1906. He also served as one of the principal informants regarding Creek culture and religion for anthropologists John Swanton and Frank Speck when they were collecting information on Creek life for the Smithsonian Institute in the early twentieth century. Silas Jefferson died in 1913 or 1914 near Beggs, Oklahoma.