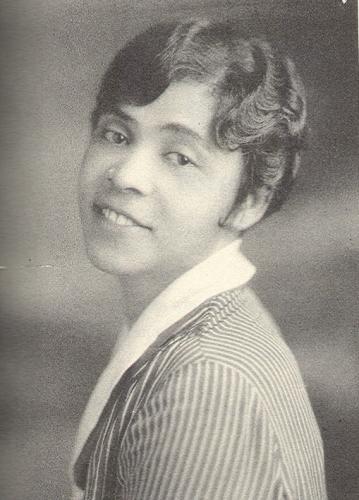 Thyra J. Edwards, born in 1897, the granddaugher of runaway slaves, grew up in Houston, Texas and started her career there as a school teacher.  Eventually she moved to Gary, Indiana and later Chicago, Illinois where she was employed as a social worker.  Edwards would eventually become a world lecturer, journalist, labor organizer, women’s rights advocate, and civil rights activist all before her 40th birthday.

By 1944 Edwards was heralded as “one of the most outstanding Negro women in the world.” She had an international approach to social work and viewed her journalistic work, travel seminars, speaking engagements, and union organizing as a part of her role as a professional in the social work arena. By the end of World War II she was the executive director of the Congress of American Women.

Concerned foremost with the plight of women and children, in 1953 Edwards organized the first Jewish child care program in Rome to assist children who had been victims of the Holocaust. From her point of view social work should: advocate for disadvantaged and at-risk populations; focus on issues and problems specifically affecting the well-being of women; and demonstrate the ability to work with diverse populations. Her views are akin to many principles currently articulated by the Council of Social Work Education. Her work was grounded in what modern sociologists call “work systems theory.”

The link between the plight of blacks throughout the world was a cornerstone of her professional philosophy. At a time when the social work profession in the United States believed that black social workers should only focus on blacks in America, Edwards worked with people of all races, nationalities, and ethnicities.

It was that viewpoint that attracted her to the Communist Party while she was living in New York in the 1930s, Edwards publicly supported the Loyalists in the Spanish Civil War and used her role as a correspondent to travel to Europe, Mexico, and the Soviet Union.  Her activities with the U.S. Communists drew the attention of the FBI and she was monitored by U.S. government intelligence organizations until her death.