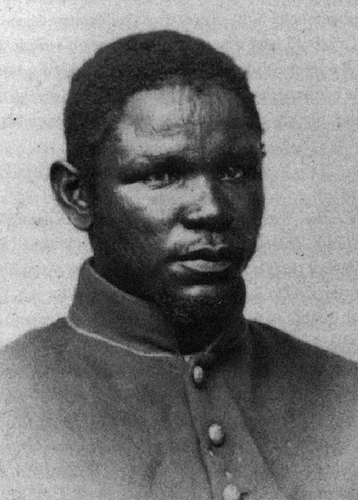 Mohammed Ali “Nicholas” Said, an enslaved African from Bornu in what is now northeastern Nigeria, traveled through Europe to the United States. He was born in Kouka, Bornu, the thirteenth of nineteen children to Barca Gana and his wife, Dalia, in 1836. His father was a distinguished general of Bornu forces, and his mother was described by him as “a beautiful but strict taskmaster.” From an early age, Said was a curious explorer, avid hunter, and quick learner.

Said grew up in a time of instability within the Central Sudan region. As a result, he witnessed at least two massive armed invasions in his early life, one of which claimed the lives of his father and three of his brothers. Around the age of twelve, shortly after the death of his father, Said was placed under the care of Malam Katory to be taught Arabic.

Three years later during a hunting trip, the course of Said’s life changed completely when he and his friends were ambushed by a band of Tuareg Berber, who were known for capturing and selling people into slavery. He claimed to have been sold by these Tuareg for a cloak and a gun to a man who took him and about twenty others across the Sahara Desert. From there, he would be sold several times and travel to Mecca (Arabia), Medina, Istanbul (Turkey), Odessa, St. Petersburg, and finally Moscow, Russia, where he would be set free. Said was then employed by Prince Nicholas Vassilievitch Troubetzkoy, with whom he would travel extensively across Europe. He was baptized a Christian and given the name “Nicholas” in 1855. Said learned Russian, French, and English. By 1858, Troubetzkoy had brought Said to Austria, Germany, Italy, France, and England.

By the time of the American Civil War, Said had left the employment of the prince. Fate took him then to the West Indies and eventually north into Canada under new employers. Shortly thereafter, he left and began teaching at an all-black school in Detroit, Michigan. From there, he enlisted in the 55th Massachusetts Infantry Regiment in the Union Army in 1863. Said was sent with the regiment down into South Carolina just as the famed 54th Massachusetts Regiment had been a month before, and he continued to fight there until mustered out of service in 1865. During Reconstruction, Said traveled the eastern seaboard of the United States but eventually settled in the South for a time, living and teaching in South Carolina, Georgia, and Alabama.

In 1867, the first draft of Said’s memoirs appeared in Atlantic Monthly and was later published as a complete autobiography in 1873. Exactly where he spent the final years of his life and how he died is disputed. After traveling a great portion of the world and mastering nearly nine different languages, never returning to Bornu, Nicholas Said died in 1882 at the age of forty-six.

Norwood P. Hallowell, The Negro as a Soldier in the War of the Rebellion (Boston: Little, Brown, and Company, 1897); Nicholas Said, The Autobiography of Nicholas Said: A Native of Bornu, Eastern Soudan, Central Africa (Memphis: Shotwell & Company, 1873); http://www.tubmaninstitute.ca/mohammed_ali_said_introduction.