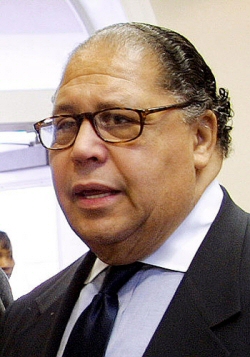 The great-grandson of slaves, Maynard Holbrook Jackson, Jr. was born in Dallas, Texas, on March 23, 1938.  His father, Maynard Holbrook Jackson, Sr., was a leading figure in the 1930s campaign for black voting rights in Dallas and a founder of Democratic Progressive Voter’s League in 1936.  His mother, Irene Dobbs Jackson, was a professor of French at Spelman College who desegregated the Atlanta city library system.  His aunt Mattiwilda Dobbs was the first African American to sing at the La Scala Opera in Milan, Italy.  When Maynard was seven years old his father, a clergyman, moved the family to Atlanta, Georgia, where he assumed pastorship of the Friendship Baptist Church.

After work with the National Labor Relations Board and a neighborhood law office, 30-year-old Jackson mounted an underfunded populist challenge to veteran Georgia segregationist Senator Herman Talmadge in 1968. Despite the odds against him, and the conservative racial climate in the state, he surprised many political observers by winning 200,000 votes, one third of the total vote, and garnering the support of many white small farmers.  He also ran well in Atlanta, reflecting the growing influence of African American voters.

In 1969 Jackson was elected vice mayor of Atlanta, serving under progressive white businessman Sam Massell, who was Atlanta’s first Jewish mayor.  Upsetting expectations that he would serve several terms as vice mayor, he immediately challenged the incumbent.  The race became acrimonious and racially charged, but on October 16, 1973, at the age of 35, Jackson won with 59% of the vote, becoming the first African American to be elected mayor of a major southern city.

Jackson served three terms, first from January 1974 to January 1982, and later from January 1990 to January 1994.  During this time he presided over the inception of Atlanta’s rapid transit system and the expansion of its airport.  He angered some conservatives (by replacing the public safety commissioner, who was accused of permitting police brutality), and members of the white business community (by pursuing an aggressive affirmative action policy for the city’s personnel management and construction contracting policies).

Jackson had a reputation for an uncompromising confrontational style, but—for many black Atlantans, as well as upwardly mobile African Americans who flocked to the city from other parts of the country—he ushered in a new era of economic opportunities that dramatically expanded Atlanta’s black middle and upper classes.  One of the major challenges to his leadership was that of healing the wounds opened by the horrific Atlanta child murders in the early 1980s.  Although political ally Andrew Young was mayor of Atlanta during the 1996 Olympic Games, Jackson is widely credited with bringing them to the city.

Jackson was notably unsuccessful with one challenge: his health.  With a weight that often exceeded 300 pounds, he struggled with obesity most of his adult life.  He frequently acknowledged his weight as a major personal health issue, and in 1992 he underwent major heart surgery.  There was speculation that his decision not to run for the US Senate in 2003 was health-related.  Later in that same year, on June 23, 2003, he collapsed and died of a stroke at Washington’s Reagan National Airport.  Jackson was 65.