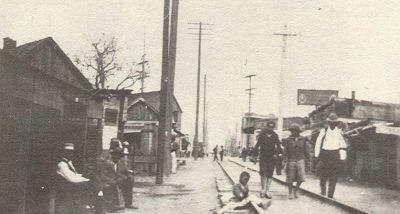 Organized in 1936 in Dallas, Texas, The Democratic Progressive Voters League is one of the oldest political organizations for African Americans in the state.  It developed in the Dallas-Fort Worth area with the goal of ensuring the rights of African Americans around the state to vote and participate in local politics.  At this time, white violence and legal obstacles such as the poll tax and white-only primaries barred the vast majority of black Texans from exercising their political rights.

Beginning in 1934, Dallas black political leaders Antonio Maceo Smith, who was the General President of Alpha Phi Alpha Fraternity and the first executive secretary of the Dallas Negro Chamber of Commerce (1933), and Maynard Jackson, Sr. (father of Maynard Jackson, Jr., the first African American Mayor of Atlanta) formed the Progressive Voters League (PVL).  The organization adopted a strategy of increasing the political power of the African American community in Dallas by paying poll taxes for black voters who could not afford to do so.  The strategy paid off the following year (1935) when the organization’s president, Ammon S. Wells, placed sixth among 60 candidates in a contest for a state legislative seat.  Wells was defeated in the run-off election but his candidacy proved the PVL would be a political force in Dallas elections.

The U.S. Supreme Court, in its 1944 Smith v. Allwright decision, eliminated Texas’s all-white Democratic primary.  Now the Democratic Progressive Voters League began to organize across the state.  By the 1950s divisions arose within the DPVL as some members wanted to remain non-partisan while others wished to ally themselves with the Democratic Party.  By 1980, the organization limited its efforts to county and municipal elections yet it continues to play a role in Dallas politics to this day.