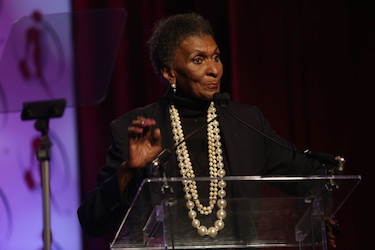 Marva Collins was born in Monroeville, Alabama to Bessie and Henry Knight where her father, who had an indelible impact on her, was one of the richest black men in town.  She attended segregated schools, and contrary to many views, these institutions were often places where students received a superior education that was rooted in high expectations and community support.  To this end, Collins developed her well-noted teaching philosophy and approach directly from her teachers in segregated settings.  Building on the communal expectation for educational excellence she graduated from Clark College in Atlanta, Georgia then taught two years in Alabama before teaching 14 years in Chicago.

Displeased with both the public and private schools in Chicago, Collins took $5,000 out of her pension to start the Westside Preparatory School in 1975 on the second floor of her home; two of her children and four students from the neighborhood were her first students. During her first year she enrolled children who had been labeled as being learning disabled and mildly retarded by the pubic school system. Marva, who was resolute in her educational approach, at the end of the first year had improved the educational level of her students by at least five grades. Her practice as an educator gained national attention as many of her graduates attended such universities as Harvard, Yale, and Stanford. She has received numerous awards, was featured on “60 Minutes,” and was depicted in a television movie in 1982 entitled “The Marva Collins Story” which honored her great success as an educator. On June 24, 2015, Collins died from natural causes while in hospice care near her home in Bluffton, South Carolina. She was 78.