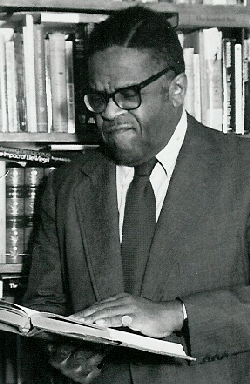 It would be difficult to find a more formidable and respected African American scholar who has had so little visibility among African American intellectuals as Nathan Alexander Scott, Jr. Born in Cleveland, Ohio on April 24, 1925, Scott finished his B.A. at the University of Michigan in 1944 and his Ph.D. in religion from Columbia University in 1953. In 1946, he was hired as dean of the chapel at Virginia Union University. From 1948 to 1955, he taught humanities at Howard University. An ordained priest in the Episcopal Church, from 1955 to 1977 Scott taught at the University of Chicago where in 1972 he was elevated to Shailer Mathews Professor of Theology and Literature. In 1976, he and his wife, Charlotte H. Scott, a business professor, simultaneously were hired as the first black tenured professors at the University of Virginia. There Scott was William R. Kenan Professor of Religious Studies and became chairman of the religious studies department in 1980.  He retired in 1990.

The basis of Scott’s preeminence is his numerous writings in which he tries to establish, as one critic put it, “that literature testifies to a ‘fundamental faith’ in existence.”  On occasion he used literary texts by black writers, but because he mostly explored the writings of distinguished white Americans and Europeans in understanding how religious perspective helps to interpret literary works, his recognition by fellow blacks suffered.  Nonetheless, Scott’s legacy rests firmly on the strength of his body of writings which is considerable. Between 1952 and 1994, he published or edited twenty-five books including Rehearsals of Discomposure: Alienation and Reconciliation in Modern Literature (King’s Crown Press, 1952); Albert Camus (Hillary House, 1965); Ernest Hemingway: A Critical Essay (Eerdmans, 1966); Three American Moralists: Mailer, Bellow, Trilling (University of Notre Dame Press, 1973); The Legacy of Reinhold Niebuhr (University of Chicago Press, 1975) and Visions of Presence in Modern American Poetry (Johns Hopkins University Press, 1993).

The extent of Scott’s influence was acknowledged with the publication of the festschrift Morphologies of Faith: Essays in Religion and Culture in Honor of Nathan A. Scott, Jr. (Scholars Press, 1990). Scott has been a fellow in the Society for Religion in Higher Education and the American Academy of Arts and Sciences. A former co-editor of both the Journal of Religion and Christian Scholar, he served as president of the American Academy of Religion in 1986. Nathan Scott died on December 20, 2006.