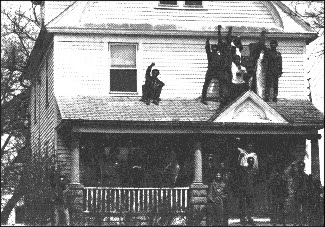 In the following article Daryl Michael Scott, Professor of History at Howard University and Vice President of Program for the Association for the Study of African American Life and History, discusses the history of the Black History Month Celebration.

The story of Black History Month begins in Chicago during the late summer of 1915. An alumnus of the University of Chicago with many friends in the city, Carter G. Woodson traveled from Washington, D.C. to participate in a national celebration of the fiftieth anniversary of emancipation sponsored by the state of Illinois.  Thousands of African Americans traveled from across the country to see exhibits highlighting the progress their people had made since the destruction of slavery.  Awarded a doctorate in Harvard three years earlier, Woodson joined the other exhibitors with a black history display. Despite being held at the Coliseum, the site of the 1912 Republican convention, an overflow crowd of six to twelve thousand waited outside for their turn to view the exhibits. Inspired by the three-week celebration, Woodson decided to form an organization to promote the scientific study of black life and history before leaving town.  On September 9th, 1915, Woodson met at the Wabash YMCA with Alexander L. Jackson, George Cleveland Hall, William B. Hartgrove, and James E. Stamps to form the Association for the Study of Negro Life and History (ASNLH).

Carter G. Woodson believed that publishing scientific history would transform race relations by dispelling the wide-spread falsehoods about the achievements of Africans and peoples of African descent.  He hoped that others would popularize the findings that he and other black intellectuals would publish in The Journal of Negro History, which he established in 1916.  As early as 1920, Woodson urged black civic organizations to promote the achievements that researchers were uncovering.  A graduate member of Omega Psi Phi, he urged his fraternity brothers to take up the work. In 1924, they responded with the creation of Negro History and Literature Week, which they renamed Negro Achievement Week.  Their outreach was significant, but Woodson desired greater impact.  As he told an audience of Hampton Institute students, “We are going back to that beautiful history and it is going to inspire us to greater achievements.”  In 1925, he decided that the Association had to shoulder the responsibility.  Going forward it would both create and popularize knowledge about the black past. He sent out a press release announcing Negro History Week in February, 1926.

Woodson chose February for reasons of tradition and reform.  It is commonly said that Woodson selected February to encompass the birthdays of two great Americans who played a prominent role in shaping black history, namely Abraham Lincoln and Frederick Douglass, whose birthdays are the 12th and the 14th, respectively.  More importantly, he chose them for reasons of tradition.  Since Lincoln’s assassination in 1865, the black community, along with other Republicans, had been celebrating the fallen President’s birthday.  And since the late 1890s, black communities across the country had been celebrating Douglass’.  Well aware of the pre-existing celebrations, Woodson built Negro History Week around traditional days of commemorating the black past.  He was asking the public to extend their study of black history, not to create a new tradition.  In doing so, he increased his chances for success.

Yet Woodson was up to something more than building on tradition. Without saying so, he aimed to reform it from the study of two great men to a broader examination of a great race.  Though he admired both men, Woodson had never been fond of the celebrations held in their honor. He railed against the “ignorant spellbinders” who addressed large, convivial gatherings and displayed their lack of knowledge about the men and their contributions to history.  More importantly, Woodson believed that history was made by the people, not simply or primarily by great men.  He envisioned the study and celebration of the Negro as a race, not simply as the producers of a great man. And Lincoln, however great, had not freed the slaves—the Union Army, including hundreds of thousands of black soldiers and sailors, had done that. Rather than focusing on two men, the black community, he believed, should focus on the countless black men and women who had contributed to the advance of human civilization.

From the beginning, Woodson was overwhelmed by the response to his call.  Negro History Week appeared across the country in schools and before the public.  The 1920s was the decade of the New Negro, a name given to the Post-War I generation because of its rising racial pride and consciousness.  Urbanization and industrialization had brought over a million African Americans from the rural South into big cities of the nation.  The expanding black middle class became participants in and consumers of black literature and culture.  Black history clubs sprang up, teachers demanded materials to instruct their pupils, and progressive whites stepped and endorsed the efforts.

Woodson and the Association scrambled to meet the demand.  They set a theme for the annual celebration, and provided study materials—pictures, lessons for teachers, plays for historical performances, and posters of important dates and people.  Provisioned with a steady flow of knowledge, high schools in progressive communities formed Negro History Clubs.  To serve the desire of history buffs to participate in the re-education of black folks and the nation, ASNLH formed branches that stretched from coast to coast.  In 1937, at the urging of Mary McLeod Bethune, Woodson established the Negro History Bulletin, which focused on the annual theme. As black populations grew, mayors issued Negro History Week proclamations, and in cities like Syracuse, New York, progressive whites joined Negro History Week with National Brotherhood Week.

Like most ideas that resonate with the spirit of the times, Negro History Week proved to be more dynamic than Woodson or the Association could control.  By the 1930s, Woodson complained about the intellectual charlatans, black and white, popping up everywhere seeking to take advantage of the public interest in black history.  He warned teachers not to invite speakers who had less knowledge than the students themselves.  Increasingly publishing houses that had previously ignored black topics and authors rushed to put books on the market and in the schools.  Instant experts appeared everywhere, and non-scholarly works appeared from “mushroom presses.”  In America, nothing popular escapes either commercialization or eventual trivialization, and so Woodson, the constant reformer, had his hands full in promoting celebrations worthy of the people who had made the history.

Well before his death in 1950, Woodson believed that the weekly celebrations—not the study or celebration of black history–would eventually come to an end.  In fact, Woodson never viewed black history as a one-week affair.  He pressed for schools to use Negro History Week to demonstrate what students learned all year.  In the same vein, he established a black studies extension program to reach adults throughout the year.  It was in this sense that blacks would learn of their past on a daily basis that he looked forward to the time when an annual celebration would no longer be necessary. Generations before Morgan Freeman and other advocates of all-year commemorations, Woodson believed that black history was too important to America and the world to be crammed into a limited time frame.  He spoke of a shift from Negro History Week to Negro History Year.

In the 1940s, efforts began slowly within the black community to expand the study of black history in the schools and black history celebrations before the public.  In the South, black teachers often taught Negro History as a supplement to United States history.  One early beneficiary of the movement reported that his teacher would hide Woodson’s textbook beneath his desk to avoid drawing the wrath of the principal.  During the Civil Rights Movement in the South, the Freedom Schools incorporated black history into the curriculum to advance social change.  The Negro History movement was an intellectual insurgency that was part of every larger effort to transform race relations.

The 1960s had a dramatic effect on the study and celebration of black history.  Before the decade was over, Negro History Week would be well on its way to becoming Black History Month.  The shift to a month-long celebration began even before Dr. Woodson death.  As early as 1940s, blacks in West Virginia, a state where Woodson often spoke, began to celebrate February as Negro History Month.  In Chicago, a now forgotten cultural activist, Fredrick H. Hammaurabi, started celebrating Negro History Month in the mid-1960s.  Having taken an African name in the 1930s, Hammaurabi used his cultural center, the House of Knowledge, to fuse African consciousness with the study of the black past.  By the late 1960s, as young blacks on college campuses became increasingly conscious of links with Africa, Black History Month replaced Negro History Week at a quickening pace.  Within the Association, younger intellectuals, part of the awakening, prodded Woodson’s organization to change with the times. They succeeded.  In 1976, fifty years after the first celebration, the Association used its influence to institutionalize the shifts from a week to a month and from Negro history to black history. Since the mid-1970s, every American president, Democrat and Republican, has issued proclamations endorsing the Association’s annual theme.

What Carter G. Woodson would say about the continued celebrations is unknown, but he would smile on all honest efforts to make black history a field of serious study and provide the public with thoughtful celebrations.

© 2009 ASALH
This copy may be republished electronically with the following acknowledgement and link:  By Daryl Michael Scott for ASALH at www.asalh.org