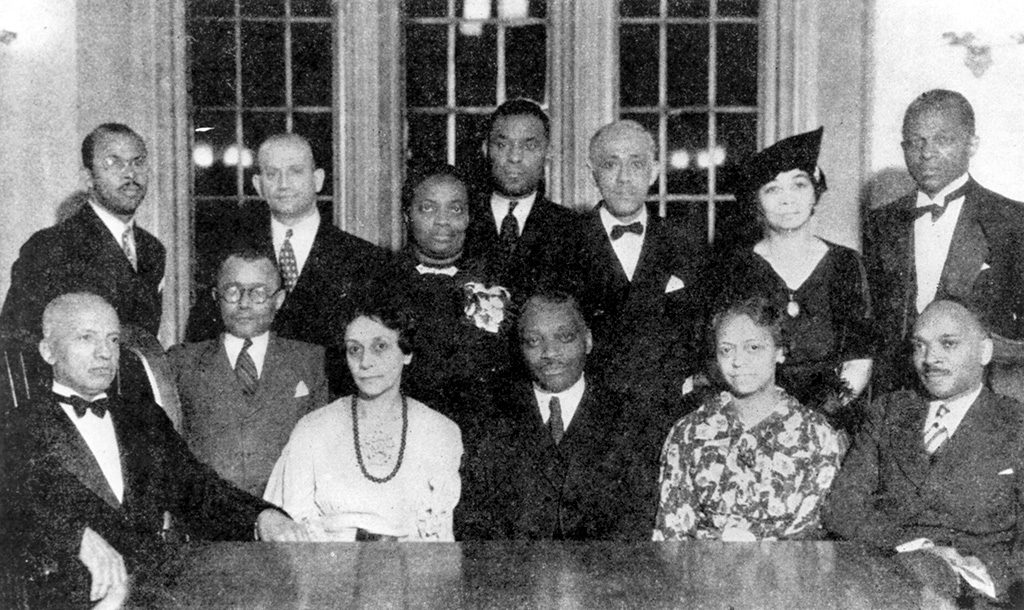 In the following account Professor Malik Simba of California State University, Fresno, describes the century-long history of the largest organized body dedicated to the research and promotion of African American history.

Dr. Woodson, known as the father of Negro History, created two publications in support of the ASNLH, the Journal of Negro History and  the Negro History Bulletin.  In 1926 he initiated the national campaign to celebrate black history through annual Negro History Week observances.  Woodson purposely chose the second week in February between the birthdays of Abraham Lincoln and Frederick Douglass.  Woodson explaining that in  publicizing the  records, contributions, and accomplishments of Black people, the Association’s aim “…is not spectacular propaganda or fire-eating agitation.  Nothing can be accomplished in such fashion…The aim of this organization is to set forth facts in scientific form, facts properly set forth will tell their own story.”

Leaning strongly on historical objectivity as a change agent for race relations progress, Woodson was a product of his time, place, and experience.  The themes of the annual ASNLH meetings  were driven by Woodson’s  personal history as a son of ex-slaves, a child laborer in West Virginia coal mines, a older high school matriculate, a secondary school teacher in the District of Columbia, and the second African American to attain a Ph.D. in history from Harvard University (1912).  These experiences instilled in him an unwavering devotion to “Black folk” and their soul filled culture and history.  Living and working as a member of the folk and teaching the folk led him to truly appreciate their ways of preserving their rich past such as “slave testimony and their oral history.”

With his Ph.D. from Harvard, Woodson envisioned the twin goals of the ASNLH as the social  scientific  collection, recording,  and publicizing the historical record while simultaneously hoping that this effort would be a “bridge to interracial group harmony ”  by confronting and defeating , in Woodson’s words, “white prejudice.”   An example of this dual goal was Woodson’s  selection of New York City’s Riverside Church with its liberal white minister, Harry Emerson Fosdick as the site of the 1931 ASNLH meeting.

Four months after the Association’s founding, Woodson began to publish the Journal of Negro History and in 1937, the Negro History Bulletin.  The Journal was aimed at professionally trained scholars involved in primary document research and whose audience would be other scholars in this field,  whereas, the Bulletin would be aimed at high school teachers and their efforts to educate the youth on the importance of Negro history.  Dr. Woodson founded  Associated Publishers in 1921 to produce valuable books on African Americans that were not acceptable to white publishing houses.  Associated Publishers, the first major non-religious black-owned publishing house in the nation, produced books, pictorials, bibliographies and other material for the observance of Negro History Week.  With Woodson’s insistence, various white scholars of Negro history were also featured in the Journal and the Bulletin. Some of these scholars were his professors at Harvard. One professor, William Munro, helped promote the Association by paraphrasing Woodson’s thinking. Munro noted “A proper understanding of the Negro problem [is] the best means for ameliorating it.”

Throughout its existence, the ASNLH’s major challenge was not its acceptance by black and white scholars or the general public, but the absence of financial stability.  To maintain the solvency of the Association, Woodson aggressively pursued funding from private scholars like George Bancroft and from major grant agencies such as the Carnegie Foundation, the Rockefeller Foundation, the Phelps Stokes Fund, the Rosenwald Fund, the Social Science Research Council and the controversial  Committee on Interracial Cooperation.  With the support of Luther P. Jackson, Alrutheus Ambush Taylor, Charles Wesley, Lorenzo Greene and other university trained scholars, Woodson promoted their research and  research proposals to garner funding from various philanthropic organizations.  He also asked the funders to include black experts on their evaluation panels.  By 1929, the SSRC, for example, had a number of African American scholars and professionals on their funding committee. Noted black scholars such as Charles S. Johnson and Ernest Just, for example, supported the Association’s efforts to collect and preserve five hundred rare manuscripts on the African American experience.

Funding, however, often came with the proverbial strings attached.  When the Laura Spelman Rockefeller Memorial Fund insisted that Woodson align the ASNLH with one of the historically black colleges or universities (HCBU’s) Woodson refused to accept its grant.  Throughout his life, Woodson harbored deep suspicions of the black administrators and faculty of these institutions who often either openly resented and or lacked a deep appreciation of the African American experience.  Therefore, Woodson leaned almost exclusively on white philanthropic largess.

Woodson often criticized white donors as well.  In 1925, when he learned the Carnegie Foundation refused to provide the ASNLH the funding he felt it deserved, Woodson said “Inasmuch as the Carnegie Corporation was the first foundation to give substantial assistance to the Association, its failure to continue to support…the Association…” casts a shadow on future funding possibilities.  When the Foundation later withdrew all of its funding, Woodson’s worst fears were realized.  A white officer of the Carnegie Foundation, Thomas Jones,  who was a firm believer in the Tuskegee-Hampton conservative accommodationist approach to black education, felt that Woodson and his Association fostered a “radical interpretation of black history.”

Such setbacks fueled Woodson’s efforts to ensure the continuation of the ASNLH.  Dr. Woodson began to put in “sixteen to eighteen”  hour work days at the Association’s office in a modest Washington, D.C. row house which he owned.  Woodson lived on the third floor and rented out the first and second floors to the Association and the Associated Publishers.  Over time Woodson grew more protective of the Association and reluctant to share control over the organization even with his closet colleagues.

Woodson’s increasingly caustic personality was partly explained by the difficulties the ASNLH faced.  As philanthropic funding for the Association dried up during the early 1930s, Woodson became  more remorseful and embittered.  Reflecting on the impact of the Great Depression on the Association, in 1935 he wrote to a colleague, “We are living on the nickels and dimes of Negroes who are not yet on the bread line.”  Yet, Woodson felt very proud that the ASNLH’s funding was being sustained, even barely, by the very people it was created to serve.

Dr. Carter G. Woodson died asleep in his living quarters at the Association’s Headquarters in Washington, D.C., on April 3, 1950 at the age of 74.  Some observers noted that when Woodson passed so would the ASNLH.  As L.D. Reddick observed on Woodson’s death, “As you know, the Association was really one person.”  Few observers such as Reddick realized at the time that Woodson’s insistence on popularizing African American history with the black masses through Black History Week observances and celebrations in  hundreds of church, school, and club plays, skits and pageants  ensured that the Association’s goals were shared and annually acted upon by thousands across the nation.   Additionally throughout the 1930s, 1940s and the 1950s, the ASNLH steadily grew, establishing branches in every major northern city and dozens of cities and small towns across the South.  Such growth ensured that Black History Week did not die with Carter G. Woodson.

Black activism associated with the civil rights and black power movements of the 1960s infused new energy into the ASNLH.  When the “new abolitionists” used the clarions of “freedom now” and “black power” they rejuvenated the Association.   ASNLH annual meetings witnessed vibrant dialogues on those two  clarions for change. This period has been called the golden age of the Association.

This new energy came with an unintended consequence.  The 1972 ASNLH meeting in Cincinnati, Ohio, revealed a deep split between civil rights and black power members of the Association.  Although the split was symbolized by the debate over the name of the Association and its journal, the conflict reflected much deeper divisions in the African American community over the overall direction of the black liberation movement.  After much bitter debate a compromise was reached: the ASNLN would change its name to the Association for the Study of African American Life and History.  The journal would remain the Journal of Negro History.

In 1976 the ASALH announced that Negro History Week activities were to be expanded into a month long observance.  At the grassroots’ level, a movement began to change the name of the annual celebratory activities from Negro History Month to Black History Month and for some, to African Peoples History Month. The ASALH accepted the popular name change to Black History Month.  Dr. Woodson’s most popular book, The Mis-Education of the Negro, first published in 1933, was republished in 1969 and declared “a key to our freedom as a people.”  In its reissued form it sold far more copies than when it was originally published.

The Association for the Study of African American Life and History has morphed from being the obsession and possession of Dr. Woodson to the obsession and possession of an entire people and a nation.  Consistent with this transitional fact is W.E.B. DuBois’s reflection on Dr. Woodson’s death and the continuing vitality of the Association that it “illustrates what race prejudice can do to a human soul and also what is powerless to prevent.”

Simba, M. (2010, January 14). The Association for the Study of African American Life and History: A Brief History. BlackPast.org. https://www.blackpast.org/african-american-history/association-study-african-american-life-and-history-brief-history/