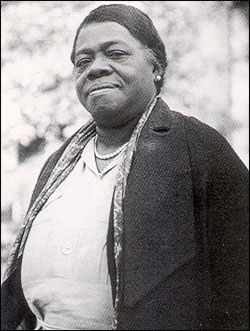 Mary Jane McLeod was born on July 10, 1875, the fifteenth of seventeen children of Samuel and Patsy McIntosh McLeod, former slaves in Maysville, South Carolina. As a child, she quickly discovered the value of education. Unlike her parents and all but two of her siblings, Bethune was born free and was formally educated at the Maysville School, a Presbyterian Mission School for African Americans. Shortly after her graduation in 1886, Bethune continued her education on a scholarship at the Scotia Seminary for Girls (now Barber-Scotia College) in Concord, North Carolina. Upon graduation in 1894, Bethune initially planned to become a Christian missionary in Africa. After teaching and working among South Carolina blacks, however, she realized that “Africans in America needed Christ and school just as much as Negroes in Africa… My life work lay not in Africa but in my own country.”

In 1898, at the age of 23, Mary McLeod married Albertus Bethune. The marriage lasted less than a decade because Albertus deserted the family in 1907.  The couple had one son, Albert McLeod Bethune. Juggling family and work, Mary McLeod Bethune taught in Georgia, South Carolina, Florida and Illinois between 1895 and 1903, before settling in Daytona, Florida. Beginning in 1904, she opened a high school, hospital, and the Daytona Normal and Industrial Institute for Negro Girls. The popularity of Daytona Normal led to its merging with the Methodist-run Cookman Institute for Men in Jacksonville in 1923, thus becoming the Bethune-Cookman College. Bethune served as the merged college’s first president from 1923 to 1942 and again from 1946 to 1947.  She was, at the time, one of the few female college presidents in the nation.

As NACW president, Bethune tried to steer it beyond traditional self-help and moral uplift toward the politics of agitation for integration by attacking racial discrimination and segregation in the Federal government. Frustrated by the difficulty of eliminating Jim Crow in the US government and the internal politics of the NACW, Bethune left the Association in 1935 and founded the National Council of Negro Women (NCNW), an organization with a more explicit civil rights agenda.

Bethune’s friendship with First Lady Eleanor Roosevelt was one of the reasons for the creation of the NCNW. That friendship led to Bethune becoming the Director of the National Youth Administration’s (NYA) Division of Negro Affairs, a post she held from 1936 to 1943. As director, she led an organization that trained tens of thousands of black youth for skilled positions that eventually became available in defense plants during World War II. She made sure black colleges participated in the Civilian Pilot Training Program which graduated some of the nation’s first black pilots.

Bethune was instrumental in integrating the Red Cross, increasing public awareness of lynching, voter discrimination in federal elections, and segregation on interstate trains and buses. In 1949, President Harry S. Truman appointed her to lead the US delegation to Liberia to observe the inauguration of President William V.S. Tubman. In 1951, she served on President Truman’s Committee of Twelve for National Defense.

Mary McLeod Bethune died of a heart attack on May 18, 1955, at the age of 79.  She lived long enough to see the US Supreme Court strike down de jure school segregation in Brown v. Board of Education, but she died seven months before the beginning of the Montgomery Bus Boycott, which ushered in the modern Civil Rights Movement.