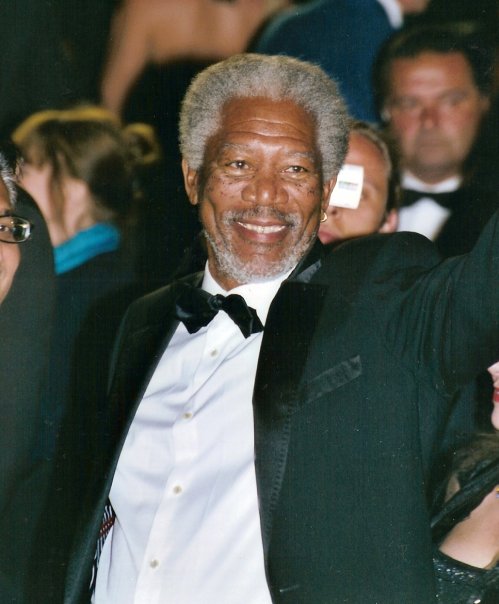 Academy Award-winning actor Morgan Porterfield Freeman, Jr. was born June 1, 1937 in Memphis, Tennessee, the son of Morgan Porterfield Sr., a barber, and Mayme Edna Morgan.  Throughout his childhood the Freeman family moved often, living in Mississippi, Indiana and Chicago.  Freeman showed early promise as an actor but turned down a partial drama scholarship from Jackson State University to enter the United States Air Force in 1955.

Throughout the early 1960s, after leaving the Air Force, Freeman studied acting and dance in Los Angeles, San Francisco and New York City.  It was in New York that Freeman made his professional theater debut with The Nigger Lovers, a 1967 off-Broadway play about the civil rights era Freedom Riders.  In 1971, Freeman broke into television, becoming widely known on the Public Broadcasting Service (PBS) children’s show The Electric Company, where he worked from 1971 to 1976.

Freeman returned to theater in the late 1970s, appearing in the New York Shakespeare Festival and earning a Tony nomination for his role in The Mighty Gents (1978). He also won a number of Obie Awards for his off-Broadway performances including his portrayal of the chauffeur in Driving Miss Daisy, a role he reprised for the 1989 film version that earned him an Oscar nomination. That same year he had a commanding role in Glory, an epic film about an all-black regiment during the Civil War. Freeman has continued to work regularly, appearing in over 60 films. In 2005, he won the Oscar for Best Supporting Actor for Million Dollar Baby (2004). His portrayal of Nelson Mandela in Invictus (2009), which he also executive produced, earned him his fifth Oscar nomination.

In 1993, Freeman made his directorial debut with Bopha!, a film about the 1976 Soweto uprising in South Africa.  Freeman is also widely recognized for his distinctive voice.  He narrated the nature documentary March of the Penguins (2005) and has replaced journalism legend Walter Cronkite on CBS News voiceovers.

Morgan Freeman has been married twice, first to Jeanette Adair Bradshaw from 1967 to 1979 and later to Myrna Colley-Lee from 1984 to 2007.  He has four children.

Freeman divides his time between Charleston, Mississippi and New York City.   He has a private pilot’s license that he received at the age of 65. He owns a restaurant in Clarksdale, Mississippi along with two night clubs in Clarksdale and Memphis.