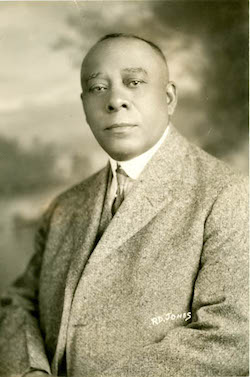 Dr. George Cleveland Hall, Chicago, Illinois African American physician and humanitarian was born on February 22, 1864, to John Ward Hall, a Baptist minister, and Romelia Buck Hall in Ypsilanti, Michigan. Dr. Hall eventually rose to head the Chicago Urban League and became vice-president of the National Urban League. In 1915 he became one of the five founding members and the first president of the Association for the Study of Negro Life and History (ASNLH), currently known as the Association for the Study of African American Life and History (ASALH).

Following graduation from Chicago public schools in 1882, Hall matriculated at Pennsylvania’s Lincoln University, graduating first in a class of five in 1886. Dr. Hall received his medical training at Chicago’s Bennett Medical College, graduating in 1888. In 1894 he married Theodosia Brewer of Council Bluffs, Iowa, and two years later, he graduated from Chicago’s Harvey Medical College while assisting in gynecology at nearby Provident Hospital, the nation’s first black-owned and managed hospital.

By 1900, Dr. Hall had established a medical practice in Chicago, and for three decades, he was one of the city’s leading black physicians. By 1907 he was a surgeon at Provident and later was appointed to the hospital’s board of trustees. As the Great Migration brought tens of thousands of black migrants to the city between 1910 and 1930, Hall oversaw the expanding healthcare delivery system for the newcomers. In 1911 he founded the Cook County Physicians’ Association of Chicago, the organization of black doctors in the city, and in 1918 he organized Provident Hospital’s first postgraduate courses. In 1926 he was appointed chief of staff of what was now the largest black hospital in the nation.

Despite his stellar professional reputation, Hall is best remembered for his diverse civic activities within the African American community. In 1915 he joined four other prominent educators—Carter G. Woodson, William B. Hartgrove, A.L. Jackson, and James E. Stamps—in founding the association for the ASALH at the Wabash YMCA in Chicago’s historic Bronzeville community. Their meeting established ASALH to universally demonstrate “…that people of African descent had contributed significantly to the making of civilization and the movement of history.” Eventually the association became and remains the largest organization of black professional and public historians with over twenty-five branches nationwide. Its annual black history-themed conventions routinely draw over one thousand participants.

Dr. Hall was the recipient of two honorary degrees. In 1925 he received a Doctors of Laws from Lincoln University and in 1926 a Doctor of Science from Howard University in Washington, D.C., the same year he became the first black Chicagoan appointed to the board of directors for the Chicago Public Library. His close friendship with Tuskegee, Alabama educator Booker T. Washington was instrumental in obtaining the support of Chicago philanthropist Julius Rosenwald for the fledgling ASALH.

Dr. George Cleveland Hall died at his Chicago home on June 17, 1930, following a lengthy illness. He was sixty-six and was survived by his widow, Theodosia, and one child, Hortense.  On January 18, 1932, Chicago city officials dedicated the George Cleveland Hall Library, the first full-service library on the city’s Southside.