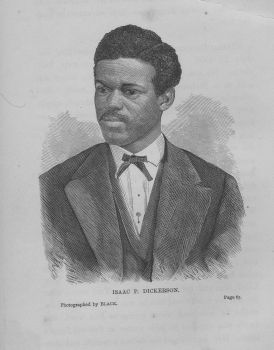 Fisk Jubilee Singer and preacher Isaac Dickerson was born enslaved in Wytheville, Virginia in 1852 and orphaned by the age of five. His earliest memory was his father’s sale to a slave trader in Richmond, Virginia. Young Isaac was treated kindly by his master, a colonel of Confederate Home Guards. When Union troops overran Wytheville in December 1864, his master escaped on horseback. But Dickerson was captured, marched 75 miles and paroled. He promised to serve as valet to a Union officer, but when he saw his master’s Home Guard straggle by, he ran after and eventually rejoined them. Two weeks after the close of the war, his master released him, and Dickerson eventually ended up working in Chattanooga, Tennessee for a Jewish shopkeeper, whose son taught Dickerson to read and write.

Dickerson moved to Memphis and was among the students burned out of a mission school in the Memphis Riot of 1866. Before coming to the Fisk Free Colored School, he taught for a time in Wauhatchie, Tennessee, where he was greeted many mornings by racist slogans and threats of violence daubed on the trees in his school yard. Promised twenty-five dollars a month, he was never paid. He quit his teaching job and proceeded to Fisk. While there he proved an ardent student of the Bible with an extraordinary gift for extemporaneous speaking.

Dickerson was among the first students to join the Fisk Jubilee Singers, suffering with them through the early weeks of their journey north and sharing in their spectacular success in New York.

During the Jubilee Singers’ tour of Britain, Dickerson so captured the imagination of the Dean of Westminster that he sponsored his education at the University of Edinburgh. Dickerson quit the troupe to pursue his studies, and remained for a time in France, peddling a bicycle from village to village and trying to spread the Gospel. But the language barrier proved too great, and he moved to England, where he spent the rest of his life preaching in the poor districts of London.  His burly figure, deep baritone, and genial manner endeared him to London’s downtrodden.

Isaac Dickerson died suddenly in 1900 of an aortic aneurism at the age of forty-eight. At his funeral, his congregation testified to the spiritual benefit derived by them from Mr. Dickerson’s powerful addresses as the Stratford Grove Baptist choir sang Jubilee Songs.