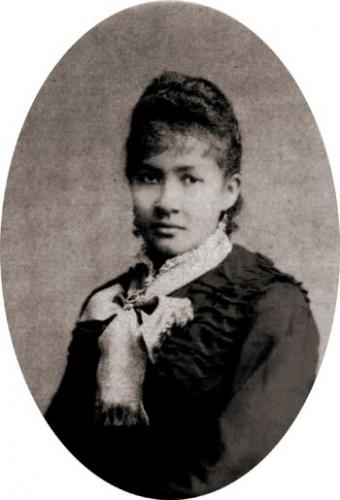 Fisk Jubilee Singer and educator America W. Robinson was born in Murfreesboro, Tennessee in 1855. Though America’s father was his master’s half brother, he enjoyed no special privileges; when his white relations ran into financial difficulty, they sold him to a Virginian named Elliott. An accomplished carpenter, her father married a slave woman who was also half white, and they produced children so pale that their mistress once considered adopting their son as her own.

As a little girl she remembered seeing her master’s parlor fill with soldiers wounded in the Civil War Battle of Stone River. Taking advantage of the ensuing chaos, her father spirited her off in a Union army wagon to nearby Nashville, where, like Thomas Rutling and Maggie Porter, she attended the Fisk Colored School from its opening day in 1866.

Robinson and her fiance James Burrus were among the first of Fisk’s students to venture into the countryside to teach black children. They were scheduled to graduate in June 1875, whereupon they intended to marry. But in January Robinson was recruited to join the Jubilee Singers’ grueling third tour. Observant, trenchant, iconoclastic, with the mordant gaze of a deposed aristocrat, America Robinson was a beauty. Her letters to Burrus remain one of the enduring records of the Fisk Jubilee Singers’ career. Although she would never make it to her commencement, she would become the only Jubilee Singer to receive a BA from Fisk University.

Robinson was a tireless performer, and more amused than impressed by the European notables who flocked to hear the troupe sing. She was among those who demanded better treatment from the American Missionary Association, winning better pay and working conditions. After the third tour closed in 1878, Robinson remained in Strasbourg, Germany to pursue studies in music, French and German. Haunted by memories of American racism, her romance with James Burrus ultimately ended.  Although tempted to remain overseas, Robinson eventually returned to the nation whose name she bore. She married Edward Lucas, a schoolteacher, and moved to Noxubee County, Mississippi, where she opened a teacher’s institute and dedicated the rest of her life to the education of black children.