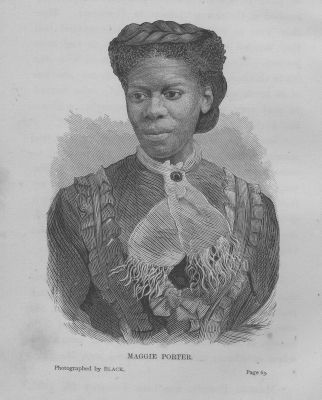 Maggie Porter was born in Lebanon, Tennessee around 1853.  At the outbreak of the Civil War in 1861, Henry Frazier, a wealthy planter from Lebanon, took refuge in Nashville with his family and house slaves, among them a Mrs. Porter, his chief domestic servant, her husband, and three daughters, including her little girl Maggie. When Union troops reached the outskirts of the city, Frazier left the household under Mrs. Porter’s care, taking her husband and two of her daughters along with him, possibly as insurance against her absconding with Maggie behind Union lines. Frazier returned to Nashville, now under Federal control and freed the Porters upon the publication of Lincoln’s Emancipation Proclamation. Mrs. Porter agreed to remain in his service. But when Frazier refused to pay her wages, she promptly hired herself out to another family.

Maggie Porter attended Joseph McKee’s Presbyterian mission school before enrolling at the Fisk Free Colored School. As a teenager she taught at a string of country schools, one of which was burned to the ground by the Klan. Once at Fisk, however, Porter’s extraordinary soprano voice was recognized and she soon became the diva of Fisk Jubilee Singer choir director George White’s musical enterprises.  She performed the title role in the cantata of Esther, the Beautiful Queen and sang solo parts in many of the Jubilees renditions of spirituals. Porter had a temperament to match her prima donna role, and made herself the least popular of the Jubilee singers. For a time White banished her from the troupe, but soon found he could not manage without her irreplaceable soprano.

Maggie Porter performed in all three Fisk troupes between 1871 and 1878, in White’s troupe, and, briefly, in Frederick Loudin’s, before founding her own successful “Original Jubilee Singers” with her husband, Daniel Cole in 1882. In August 1897, they performed in a beer garden in Lucerne, Switzerland for the Jubilees’ lifelong fan, Mark Twain. “Arduous and painstaking cultivation has not diminished or artificialized their music,” he reported afterward, “but on the contrary, to my surprise, has mightily reinforced its eloquence and beauty. . .  It is utterly beautiful, to me; and it moves me infinitely more than any other music can.”

Maggie Porter continued performing with her troupe, but after years of trouble on trains and in hotels, she eventually vowed never to set foot in the South again, choosing instead to live in Detroit, Michigan. She kept that vow until 1931, when Fisk finally induced her to return to Nashville for the sixtieth anniversary of the day she and the Jubilees first set off from Fisk. She was a much-revered figure in Detroit, where she died in 1942, at eighty-nine the longest-living member of the original Fisk Jubilee Singers.