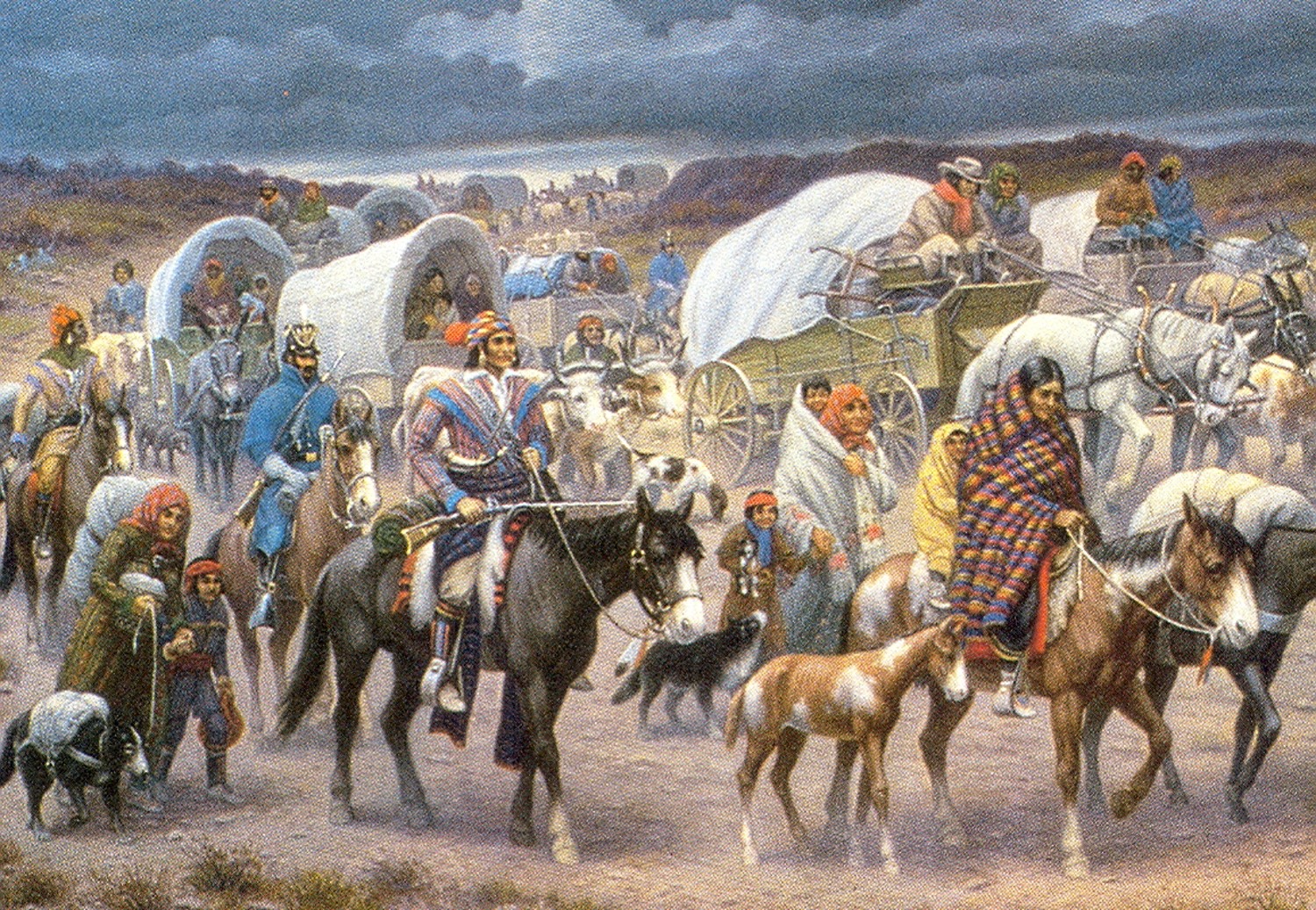 The forced removal of Native Americans from the southeastern United States beginning in the 1830s to Indian Territory west of the Mississippi River is known as the Trail of Tears. Under British colonial rule and continuing during the first decades of American independence, Indians were forced westward by expanding numbers of colonists. As the white population increased in the new United States, citizens urged the federal government to open up these lands to white settlement. Land speculators were prominent leaders of this movement.

Five major Indian tribes in the southeastern regions of the United States were known as the “Five Civilized Tribes” (Cherokees, Chickasaws, Creeks, Choctaws and Seminoles) because they had adopted many of the customs, values, and religion of the dominant white culture. The more affluent Indians had large farms and agricultural plantations and like Southern white landowners, purchased and used enslaved Blacks for labor. In the census of 1833, the Creek tribe had a population of 22,694 with 902 slaves; the Cherokees numbered 16,542 with 1,592 Black slaves. These slaveholders, although always a minority of their tribes, were nonetheless oppressors of Blacks they owned and enthusiastic participants in a global economy driven by cotton. They also believed they were racially superior to Blacks.

In 1830 gold was discovered, ushering in a gold rush in Georgia which resulted in even greater demands by whites to remove the Indians from the land. In response, the U.S. Congress and President Andrew Jackson promoted the Indian Removal Act of 1830, which allocated $500,000 to purchase Indian land in the Southeast and remove the inhabitants west of the Mississippi to what would be known as Indian Territory. An estimated 70,000 Indians, along with their Black slaves who were approximately 10% of that total, were forced to the new Indian Territory.

Several different land routes and one riverine route were used by the various tribes and their slaves to reach the new land. The average distance of the routes was 5,000 miles. This forced movement and resettlement of people was collectively called the Trail of Tears. What is not widely known is that thousands of Black slaves, considered property by Indians, also suffered and died on the journey. Slaves who walked the Trail of Tears hunted, cooked, and cleaned for their masters. One prominent Cherokee, Joseph Vann, took 200 slaves with him. At least 175 Black slaves owned by Cherokees died in transit.

Once in Indian Territory, slaveholding Indians used their slaves to increase their wealth. Enslaved people cleared lands and plowed and planted cotton and other crops. Others were engaged in skilled trades (blacksmithing, carpentry, etc.) and as domestic servants. In 1860 the slave population among the various tribes ranged from 10% to 29% of the total population in the new Indian Territory. On the eve of the Civil War, Indian people held 7,367 Black slaves. Slave codes that the Cherokee had enacted in 1819 continued in force in the new territory.

The vast majority of slaves taken to the new territory were treated as chattel and regarded as property. However, there is evidence that the condition of slaves varied among the different Indian peoples. The Seminoles, in particular, treated their slaves as indentured servants or sharecroppers, allowing them to remain armed and live in small settlements while collecting a yearly tax (usually agricultural products) from them.

The Trail of Tears, a consequence of greed and racism, was a shameful episode in our nation’s history that negatively impacted untold numbers of Indians but also intensified the suffering of their enslaved African Americans.

Quintard Taylor, In Search of the Racial Frontier (New York: W.W. Norton & Company, 1998); “How Native American Slaveholders Complicate the Trail of Tears Narrative,” https://www.smithsonianmag.com/smithsonian-institution/how-native-american-slaveholders-complicate-trail-tears-narrative-180968339/: “Trail of Tears,” https://www.britannica.com/event/Trail-of-Tears; “The Trail of Tears and the Forced Relocation of the Cherokee Nation, (Teaching with Historic Places),” https://www.nps.gov/articles/the-trail-of-tears-and-the-forced-relocation-of-the-cherokee-nation-teaching-with-historic-places.htm.