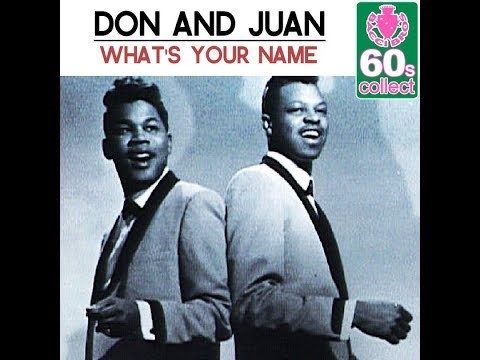 Don and Juan met while painting apartments in New York City and began singing on the job to make the day move faster. Their up-tempo single, “Who’s That Knocking,” was released on the Shad Record label in 1959. It peaked at no. 71 on the Billboard Hot 100 Charts. The record label later dropped them because the song was not as successful.

In 1962, Don & Juan released the top 40 doo-wop classic, “What’s Your Name” on Decca Records Big Top label which proved to be their biggest hit. After they appeared on American Bandstand on February 1, 1962, the single peaked at no. 7 on the Billboard Hot 100 Chart. Their follow-up single that same year was “Magic Wand” which reached no. 91. The flip side of this song was the ballad “What I Really Meant to Say,” which was syncopated with a Latin beat. It went unnoticed.

In 1963 the duo released the single “True Love Never Runs Smooth” by composers Burt Bacharach and Hal David. While the composition came from leading songwriters at the time, it was not a commercial success.

The duo’s single, “What’s Your Name,” was featured on the soundtrack of It Came from Hollywood in 1982. Later that year the hit was nominated to the Doo-Wop Hall of Fame.

Roland “Don “Anderson Trone died on May 9, 1982 in New York City. He was 45. Following the death of Trone, Johnson invited the baritone singer Alexander “Buddy” Faison to perform with him in 1993. Faison became the new “Don.”

In the 1998 film Slam, in one of the scenes, two police officers are driving while debating the relevance of the lyrics to “What’s Your Name.” Claude “Juan” Johnson died on October 31, 2002 in New York City. He was 67.