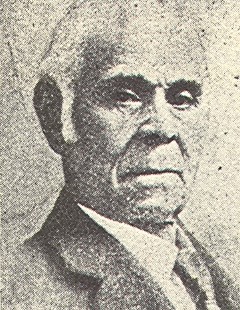 James Madison Bell, poet, orator and activist was born in Gallipolis, Ohio on April 3, 1826. Bell lived in Ohio most of his life although he briefly resided in Canada and California before eventually returning to Ohio. When Bell was 16 he moved to Cincinnati to live with his brother-in-law George Knight who taught him the plastering trade. Knight and Bell were talented plasterers who in 1851 were awarded the contract to plaster the Hamilton County public buildings.

On November 9, 1847, Bell married Louisiana Sanderlin. The couple eventually had seven children and lived in Cincinnati until 1854 when they moved to Chatham, Ontario, Canada. Chatham was a major destination for the Underground Railroad, and while there Bell became involved in abolitionist activities and later returned to Cincinnati to continue his antislavery work.

Although he supported himself primarily as a plasterer, Bell soon became known for his speeches and poems which he used in the campaign against slavery.  His most famous poem, “The Day and the War,” was read at Platt’s Hall in Cincinnati in January 1864 for the Celebration of the first Anniversary of President Lincoln’s Emancipation Proclamation. Bell dedicated “The Day and the War” to friend and fellow abolitionist John Brown who was executed in 1859 for his role in the raid on the federal arsenal at Harpers Ferry.

Bell was also active in the African Methodist Episcopal (AME) Church and became superintendent of the AME Sunday School from 1870-1873. His wife and oldest son are thought to have died in 1874. Bell continued to travel around as an orator until 1890 when he settled down with his family in Toledo, Ohio. In 1901 Bell published 27 of his poems which he called The Poetical Works of James Madison Bell.  James Madison Bell died one year later in Toledo, Ohio.