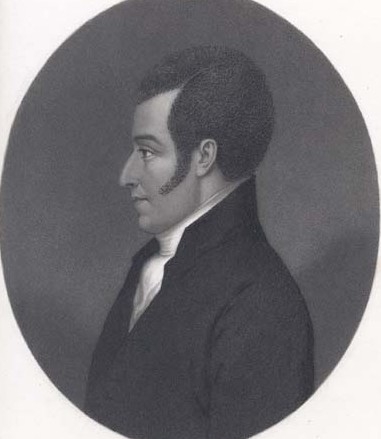 Daniel Coker (born Isaac Wright) was a writer, activist, and a founder of the African Methodist Episcopal (AME) Church who eventually emigrated from the United States to Sierra Leone as a missionary and colonist. Coker was born in 1780 in either Baltimore County or Frederick County, Maryland to Susan Coker, a white indentured servant, and Edward Wright, a slave father. He was raised in a household with his white half-brothers from his mother’s previous marriage and was allowed to attend the local school as their valet. While still in school he fled to New York where he changed his name to Daniel Coker and was ordained a Methodist minister.

Upon secretly returning to Maryland, Coker’s friends helped him purchase his freedom which gave him the rare opportunity to boldly speak out against the institution of slavery as well as participate in activities not usually open to black Americans at the time. He began both teaching and preaching in the Baltimore area.  Responding to racial discrimination in the Methodist Church, Coker called upon African American Methodists to withdraw from the white-dominated church and establish their own organization. Unable to recruit enough parishioners from the Sharp Street Church where he worked, Coker and others who advocated his separatist ideals broke from the congregation to form the African Bethel Church, which later became Bethel A.M.E Church.

In 1816 Coker and his supporters were invited to attend the Philadelphia Conference, from which the national organization of the African Methodist Episcopal Church was formed. The new AME Church denomination was the first in the United States founded by people of African ancestry.  Coker became the first church secretary and was nominated to be the first bishop of the new denomination, a position he declined, possibly due to controversy surrounding his light-toned skin. Coker was expelled from the church from 1818 for reasons unknown but was then allowed to return to his ministerial role one year later.

Daniel Coker left the United States in 1820 with 84 other African Americans who would become settlers Liberia.  Coker was one of four AME missionaries who intended to establish the denomination in Africa.  When the other three missionaries died, Coker led the remaining colonists to the British colony of Sierra Leone where they were welcomed by Governor Charles MacCarthy.  Coker eventually established a church in Freetown and remained its spiritual leader until his death in 1846.