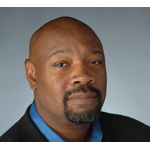 Herb Ruffin is Associate Professor of African American Studies at Syracuse University.  He holds a Ph.D. in American History from Claremont Graduate University, California. His research examines the African American experiences in Silicon Valley (California), San Antonio (Texas), and in particular, the process of Black suburbanization in the American West from 1945-2010.  Professor Ruffin’s book Uninvited Neighbors: African Americans in Silicon Valley, 1769-1990 was published by the Oklahoma University Press in 2014. In addition, he has authored numerous articles, book reviews, and online academic publications that focus on African Diaspora History and Culture, the Black West, Urban Studies and Social Movements. Moreover, Ruffin serves as an appointed committee member on the Organization of American Historians Committees of Committees, and on BlackPast.org’s advisory board. He has also been an active consultant in regard to organizing curriculum, public exhibits, and historical presentations on Africa and African Diaspora history and culture, including work with the Smithsonian Institution, Africa Initiative, and serving as U.S. Historian Delegate to South Africa.

The first Black settlers in what is now the western United States were Spanish speakers who came north from what is now central Mexico. Their roots there began in 1519, when Black men were among the Spanish conquistadores who invaded and destroyed the Aztec Empire, … END_OF_DOCUMENT_TOKEN_TO_BE_REPLACED

In the article that follows Syracuse University historian Herbert G. Ruffin II takes us back in time to describe the Tulsa Race Massacre of 1921 on the eve of its 100-year anniversary. African American life and the passing down of wealth from one generation to … END_OF_DOCUMENT_TOKEN_TO_BE_REPLACED

Ples Sterling Stuckey, Jr. was a professor of history best known for his impact on shifting slavery studies from examinations ancillary to enslaved African American lives to the study of their history, culture, and sociopolitical expression as central to the understanding of African American and … END_OF_DOCUMENT_TOKEN_TO_BE_REPLACED

In 2007, Ambassador John L. Withers II, a second generation diplomat, was appointed by President George H.W. Bush to serve as ambassador to Albania. Withers was born in 1948 in Guilford, North Carolina, to John L. Withers, Sr. and Daisy P. Withers. His father had briefly worked as a political science professor … END_OF_DOCUMENT_TOKEN_TO_BE_REPLACED

In the article below, Syracuse University historian Herbert Ruffin explores the rapid rise of the Black Lives Matter Movement in 2013 as the most recent development in the ongoing struggle for racial and social justice in the United States. In the summer of 2013, three … END_OF_DOCUMENT_TOKEN_TO_BE_REPLACED

In 2013, Brian A. Nichols, career Foreign Service officer with the rank of Minister Counselor, was appointed by President Barack Obama to serve as ambassador to Peru. Nichols was born in 1965, to Charles Harold and Mildred (Thompson) Nichols.  Charles Harold Nichols was a Professor … END_OF_DOCUMENT_TOKEN_TO_BE_REPLACED

On May 26, 1992, career diplomat Kenton Wesley Keith was nominated by President George H.W. Bush to serve as U.S. ambassador to Qatar.  After U.S. Senate confirmation, Keith arrived in Ad-Dawhah (Doha), the capital of Qatar and presented his credentials on September 2, 1992.  He … END_OF_DOCUMENT_TOKEN_TO_BE_REPLACED