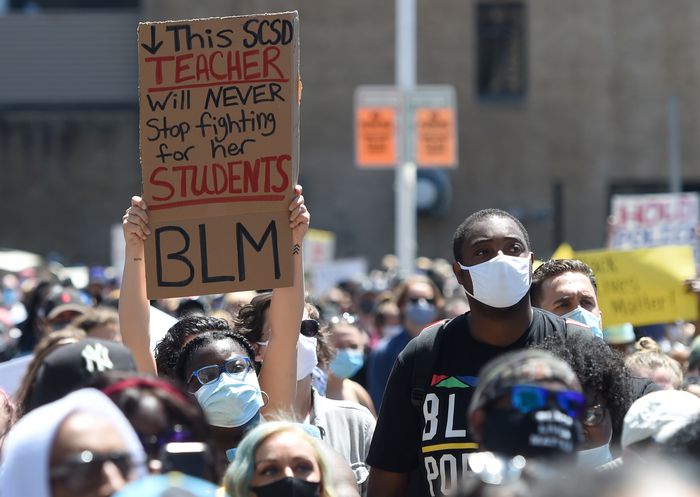 The Syracuse, New York Chapter of Black Lives Matter was founded by public school educator and community actor Anthony Harper on August 6, 2015. The founding occurred several weeks after Black Lives Matter hosted its first national annual conference in Cleveland, Ohio. As of August 12, 2016, the Syracuse chapter has been using Facebook to develop a political agenda and mobilize for action.

The Chapter was inspired when members of the Syracuse community followed the path of the Black Lives Matter Freedom Ride to Ferguson, Missouri, in mid-August 2014. During this non-violent demonstration, Syracuse University professor, Dr. Sherri Williams, and graduate students Jeanelle Hope and Nikeeta Slade, participated in Black Lives Matter’s first major protest for justice in the wake of the death of 18-year old Michael Brown at the hands of police officer Darren Wilson. The Freedom Ride included over 500 BLM supporters from nearly 20 cities. For the seven Syracuse participants the Ride prompted the formation of the group #SUFerguson which included Syracuse University’s Department of African American Studies, Cold Case Justice Initiative, the Southern Christian Leadership Conference (SCLC), and Syracuse Answer Coalition. #SUFerguson partnered in staging several events addressing police brutality throughout fall 2016. A year after Ferguson, a Black Lives Matter chapter was formed in Syracuse.

Similar to most local Black Lives Matter chapters, Syracuse’s chapter was created to support the national movement as well as the struggles of black, brown, and working poor people in the city. It formed in response to generations of socioeconomic neglect. Syracuse is one of the most segregated cities in America.  As such the city has one of the worst public school districts and some of the most concentrated poverty for black and brown people in the U.S. The majority white and affluent populations in the metropolitan region’s suburbs have had a different experience. Since the 1980s, these communities have consistently ranked as among the top-ten best places in the U.S. to raise families. The local chapter’s response to this bifurcated reality has been to demand immediate socioeconomic change.

This chapter has been attempting to do this by providing a forum for black people and their allies to address issues that they think make their lives matter.  The chapter’s website has functioned as the repository of news on police abuse and violence in blog, vlog, and linked article formats. A growing list of other posts have addressed fair housing, poverty, victims of homicide, community institutions like the South Side’s Dunbar Center.  The chapter also protested against Republican presidential nominee, Donald Trump, during his visit to Syracuse and Central New York in April 2016.

Since its founding on August 6, 2015, Syracuse’s Black Lives Matter Chapter has demonstrated that like the national movement, this local movement, too, draws energy and organizational philosophy from the Civil Rights/ Black Power movement, Pan Africanism, Africana Womanism, the LGBT movement, the Occupy Wall Street movement, cyber activism, and socially conscious hip hop. Moreover, the movement is starting to fuse the efforts of social justice activists at predominantly white and affluent Syracuse University, with those of grassroots activists who live primarily within Syracuse’s deeply segregated South and West Sides. On July 8, this collective participated in Black Lives Matter Upstate New York rallies in Rochester, Albany and Ithaca, against police violence, institutionalized racism, and transphobia. Ten days later, the Syracuse chapter led a mass demonstration in the city’s downtown, in which most protestors wore black, and non-violently asked for fair treatment and immediate socioeconomic reform. Their hashtag for the event was #WeMatter.”