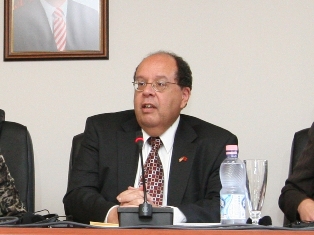 In 2007, Ambassador John L. Withers II, a second generation diplomat, was appointed by President George H.W. Bush to serve as ambassador to Albania. Withers was born in 1948 in Guilford, North Carolina, to John L. Withers, Sr. and Daisy P. Withers. His father had briefly worked as a political science professor but is best known for his service as a diplomat for the United States Agency for International Development.  His mother was a homemaker, raising John II and his brother Gregory.  Withers, whose grandfather, Robert Baxter Withers, and father fought in World War I and World War II, respectively, spent his childhood where his father was stationed, in Laos, Thailand, Burma, Korea, Ethiopia, and Kenya, witnessing, first-hand, the struggle for Southeast Asian and East African independence.

Withers graduated from Harvard University in 1971 with a Bachelor’s Degree in History. In 1975, he earned his Master’s Degree in East Asian Studies from McGill University in Montreal, Canada. A year after graduating from Yale University (1983), with a Doctor of Philosophy Degree in Modern Chinese History, Withers began pursuing his Foreign Service career.

From 1984 to 1993, Withers’s path to the ambassadorship was unusual.  He served in typical junior officer posts that ranged from Political Officer (PO) to Desk Officer (DO) but he was also posted in key countries to U.S. diplomacy in Northern/Eastern Europe, West Africa, and Southeast Asia, a rare combination of geographic areas for any diplomat. In this period he served at U.S. Embassies at The Hague, Netherlands (PO, 1985-1986), Lagos, Nigeria (PO, 1987-1990), and Moscow, Russia (PO, 1991-1993). At the State Department he was Desk Offer in the Office of Chinese Affairs (1986-1988), and in the Office of Northern European Affairs specifically assigned to Ireland and Iceland (1993).

As senior diplomat, Withers assisted mission chiefs in the Office of the Deputy Secretary, as Special Assistant (1993-1996), and in the U.S. Embassy in Riga, Latvia, as Deputy Chief of Mission (1997-2000). From 2002 to 2003 he was the Director of the Office of North Central European Affairs at the State Department in Washington, D.C.  Withers directed the State Department’s Operations Center from 2003 to 2005.

As ambassador to Albania (2007-2010), Withers was committed to building better relations with Albanian citizens. He led the U.S. Embassy in Tirana, the capital, in assisting Albanian lawmakers in efforts to develop a stronger democracy and economy and to reduce the widespread poverty in the nation. He was ambassador in 2009 when Albania became a NATO member and as the nation moved closer toward membership in the European Union. He was a consistently harsh critic of Albania’s political elite and the country’s widespread corruption.

Ambassador Withers’s tenure in Albania had its moment of controversy when he and five other Embassy officials were accused of illegal ammunition trafficking to Afghanistan in 2009.  A subsequent investigation cleared him and his subordinates of wrongdoing.  WikiLeaks’ release of confidential diplomatic cables later that year showed that Withers, while ambassador, had authored a report that subsequently disqualified Tirana from competing for the lucrative Millennium Challenge Corporation grant.  Both revelations weakened Withers’s effectiveness as ambassador.