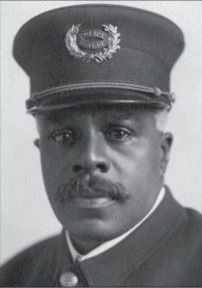 Walter Lawson was a Buffalo Soldier, a private with the 25th Infantry Regiment of the US Calvary. Lawson was born in Clark County, Virginia in January 1862, to Thomas and Susan Lawson. Not much is known about Lawson’s life before his public service. He served in the 25th Infantry from 1886 to 1891 during the American-Indian Wars. Lawson’s unit traveled from Montana to Minnesota and into the Dakotas. His regiment was involved in the Wounded Knee Massacre in South Dakota that ended with the Ghost Dance War in 1890, after which he was discharged.

Lawson married Millie Langford on July 3, 1893, in Helena, Montana. They moved to Spokane, Washington in 1894 and had a son named Walter T. Lawson Jr. in 1906. Lawson first worked as a porter at the Wilmot Hotel, and was hired as a Special Police Officer in 1899, only the third African American hired as a policeman in the city. The first two African American officers only served for a short time—the first for a year in 1892 and the second for a short-term assignment in 1893. Lawson worked security jobs for private businesses in the city. Throughout his career, Lawson worked his way up to a full-time police officer. He was the Patrol Wagon Driver for several years when it was horse-drawn, and he also drove the first automobiles put on the road, patrolling the outskirts of the city. His driving skills earned him the title of the department Chauffeur.

Although Lawson was a police officer, he was still subject to local racism. While he was in plain clothes during a 1912 incident, a white businessman punched him in the face and threw him up against a wall, swelling his eye near shut. He was well-liked by his fellow officers, who pooled their monies to send Lawson to a hot springs when he was ill in 1913. Lawson was in service when the 1915 movie Birth of a Nation was first shown in Spokane. Local black residents were the subject of random racist acts, but there is no record of his response to these incidents. Lawson a member of the Inland Empire Lodge of Colored Masons and served as an officer in the Order of the Eastern Star.