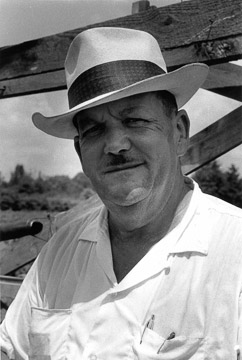 Vernon Dahmer in his cotton field, September 1964
Fair use image

Vernon Dahmer, one of the most powerful racial justice leaders in the Piney Woods of southeast Mississippi, was killed in 1966 for his civil rights activism. Born on March 10, 1908, Dahmer’s parents were George and Ellen Dahmer of Forrest County, Mississippi. He graduated from Bay Springs High School and in March 1952, he married Ellie Jewel Davis. Vernon and Ellie were the parents of eight children and had a family home in the Kelly Settlement area in Forrest County.

Dahmer owned several business ventures including a store, a sawmill, a planning mill, and a 200-acre farm. He also commercially farmed and had another 300 additional acres under cultivation, making him one of the most successful black farmers in the state.

In addition to managing his businesses, Dahmer was a civil rights activist who served as president of the Forrest County Branch, National Association for the Advancement of Colored People (NAACP). He led voter registration drives in his region of the state in the early 1960s and was famously quoted as saying, “If you don’t vote, you don’t count” and placed a voter registration booth in his store in late 1965 in effort to register local African Americans.

In the early morning hours of January 10, 1966, two carloads of armed Ku Klux Klan members drove onto the property of Vernon Dahmer and his family, ten miles outside of Hattiesburg, Mississippi. The Klansmen set fire to the Dahmer’s store and house and blasted the buildings with gunfire. Mrs. Dahmer and three of their children managed to escape, but Dahmer sustained fatal lung damage while holding off attackers as his family fled. Vernon Dahmer was 57 at the time of his death.

The FBI launched the DABURN case and fourteen men, most with Ku Klux Klan connections were indicted in connection with the attack on the Dahmer home. Thirteen were eventually brought to trial in 1968, eight on charges of arson and murder. Four of the accused were convicted and one entered a guilty plea. In addition, eleven of the defendants were also tried on federal charges of conspiracy to intimidate Dahmer because of his civil rights activities. However, former Ku Klux Klan Imperial Wizard Sam Bowers, who was believed to have ordered the murder, was tried four times, with each trial ending in a mistrial.

Finally, in August 1998, Bowers was tried for the fifth time. This time, on August 21, 1998, he was convicted and sentenced to life in prison.

Jerry Mitchell, Race Against Time: A Reporter Reopens the Unsolved Murder Cases of the Civil Rights Movement (New York: Simon & Schuster, 2020; William Sturkey, Hattiesburg: An American City in Black and White (Cambridge, MA: Belknap Press: An Imprint of Harvard University Press, 2019; Gordon A. Martin Jr., Count Them One by One: Black Mississippians Fighting for the Right to Vote (Jackson: University Press of Mississippi, 2010).