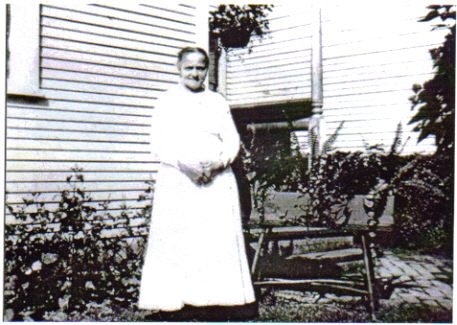 Martha Hartway was one of the black pioneers of Columbus, Ohio. She was born a slave in Powhatan County, Virginia she believed in September 1858 (the exact date of her birth is unknown). Her parents were her white slaveowner and her enslaved mother, both names unknown.

Martha’s grave marker states that she was born in 1854. It is believed that the listed date is an estimate as no birth records have been uncovered. She had an older brother, John and sister, Pearl. Their white half brother (name unknown) set them free after their white father died. The siblings, urged by their mother, were encouraged to travel north. Martha, however, was unable to continue the journey due to illness and often hid in bushes on her journey north until she was discovered by Sophia Kelton in 1864. Pearl would eventually reach her final destination, Chicago, but it is unknown as to what happened to her brother John.

Sophia Kelton was the wife of Fernando Kelton who had migrated to Columbus, Ohio from Vermont in the 1830s. Both were prominent figures in Columbus. Fernando had built a prosperous business and in 1841 married Sophia Stoner, the daughter of the man who first employed him upon his arrival in the city. The Kelton family later become involved in the abolitionist movement. It is thought that their residence, built in 1852 at 586 East Town Street was a stop on the Underground Railroad. (Historical Marker pictured) The Keltons helped a number of fugitive slaves passing through Ohio despite the risk of Ohio’s black laws.

Sophia Kelton discovered Martha hidden in the bushes of her garden and noticed she was very ill. The Keltons decided to take Martha in and raise her as their own. This proved beneficial as Martha became a playmate to their own children and as a domestic worker to assist in the home with cooking and various other chores. Martha would remain at the home of the Keltons until 1874 when at the age of sixteen she married Thomas Lawrence from Cadiz, Ohio. Martha and Thomas were married in the parlor of the Keltons home. Lawrence, a carpenter, also worked for the Keltons.

Thomas and Martha Lawrence stayed with the Keltons until they purchased their own homes in Columbus in 1880. However, prior to purchasing their own home, they had a son and daughter; Arthur Kelton Lawrence born October 12, 1875, (whose middle name would reflect Martha’s love for the Kelton family) and Sarah Lawrence, born February 17, 1877. Arthur Kelton Lawrence become a prestigious black doctor in Columbus while his sister married and became a homemaker.