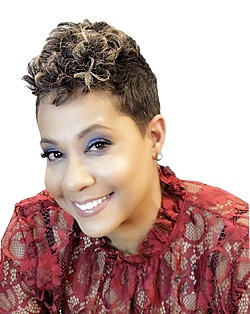 A Columbus, Ohio native and Graduate of Columbus East High School, she attended Ohio University where she majored in History and received her Bachelor’s of Arts & Science.

After graduating, Mrs. Fuller-Yates spent the next eight years working in corporate America in the Banking industry. Shortly after leaving her position as Vice President of Call Center operations for Bank One (Chase Bank), she decided to take a position with an online logistics Company. Due to this new uncharted thing called the Internet, this task proved difficult and this particular Tech start up did not survive the early years of the World Wide Web and resulted in her being laid off.

In October 2000, she received her articles of Incorporation to establish AHCinc facility Services. AHCinc Services Successfully operates to this day and has serviced thousand of clients throughout central Ohio.

In 2012, Fuller-Yates received her Master’s Degree from Savannah College of Art and Design. After graduating, she started her second Business in Columbus, Ohio: Ydecorate, LLC. Her vision for Ydecorate was to incorporate traditional design practices with groundbreaking app development to help revolutionize the design industry.

She partnered with the software developer Autodesk to create an interactive app to aid with 3D rendering and décor placement through realtime graphics. This concept was groundbreaking to the industry.

In late 2015, she decided to part ways with Autodesk, and released her rights to sell the developed app abroad. That same year, she was given the opportunity to teach The History of Art as an Adjunct Professor at the Columbus College of Art & Design, and later that year, The History of Architecture and Design.

In 2016, she developed her role as a Lifestyle Expert, merging her mind for business and leadership with her love of Design, Fashion, Entertainment and Cultural History & traditions to create a new brand titled “Rita Fuller-Yates.” She published her first book, Life, Camera, Action! – A guide to great hosting and entertainment in early 2016. Her book is distributed worldwide and can be purchased through Amazon and Barnes and Noble Bookstores.

Rita Fuller-Yates currently serves as host for two online series, “Home Again” and “In da Streetz!” With “Home Again,” she continues her mission to Bring Social Entertainment back into our homes through fun recipes, and stories that reminds us to remember tradition and old school values. While “In da Streets”, she takes us on a Journey to discover amazing History right in our backyard. She shares fun facts and historical profiles of people, places and events that happened right in our community.

In addition to her weekly online series, you can find her each month on WSYX6/Fox28 and WBNS 10TV as she serves as the featured On-Air pop culture Lifestyle Expert. You can also read more from Rita Fuller-Yates on newsstands worldwide as a regular Historical contributor for READY magazine. In Early 2020, Rita Fuller-Yates was appointed to the Board of trustees for the Columbus Landmarks Society. She has begun writing her second book and continues to write articles for various online outlets.

Harriet Powers is one of the best known southern African American quilt makers in the nation. Only two of her quilts survive today, both made after the Civil War. One is in the National Museum of American History collection at the Smithsonian Institution in Washington, … END_OF_DOCUMENT_TOKEN_TO_BE_REPLACED

The Martha Hartway Lawrence Minidoc   Martha Hartway was one of the black pioneers of Columbus, Ohio. She was born a slave in Powhatan County, Virginia she believed in September 1858 (the exact date of her birth is unknown). Her parents were her white slaveowner … END_OF_DOCUMENT_TOKEN_TO_BE_REPLACED
Scroll Up