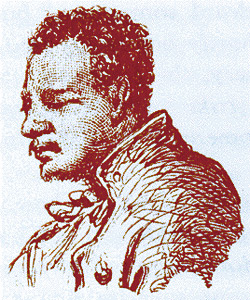 Known as the “Emperor,” Shields Green was a fugitive slave who was executed in 1859 for his role in John Brown’s Raid on Harper’s Ferry. Shields Green was born a slave in South Carolina, with his birth year varying from 1825 to 1836. As a young man he escaped through the Underground Railroad network to Rochester, New York, where Frederick Douglass provided shelter and introduced him to radical abolitionists.

In 1859, Green and Douglass traveled to Chambersburg, Pennsylvania to meet with John Brown, a white abolitionist from Ohio. Brown hoped to enlist Douglass’ support in coordinating an armed uprising among slaves through a raid on the federal arsenal in Harpers Ferry, Virginia. Douglass considered Brown’s movement hopeless and ultimately harmful to black men. At the two-day meeting, Green listened to both sides, but ultimately decided accompany Brown.

Green left the meeting with Brown’s son Owen and joined other black men who had allied with Brown, including Lewis Leary and John Anthony Copeland, both residents of Oberlin, Ohio. The raid failed, and Green was charged with treason, murder and leading slaves to rebel. Using the 1857 Dred Scott decision that ruled against citizenship for slaves, Green’s attorney successfully argued that as an escaped slave who lacked citizenship, Green could not be charged with treason. However, Green was found guilty on the two other counts and sentenced to death. He was hanged alongside Copeland on December 16, 1859.

Green’s family never recovered his body for a proper burial. Instead, the corpse went to Winchester Medical School in Virginia, where students dissected his body. In 1865, the residents of Oberlin, Ohio commemorated all of Brown’s raiders. Originally located in the town’s Westwood Cemetery, the monument was moved in 1971 to the Martin Luther King, Jr. Park.