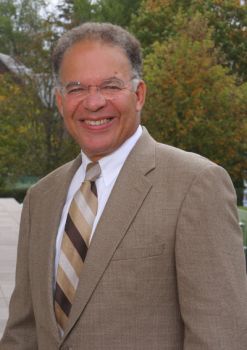 Hugh Bernard Price, civil rights activist and president of the National Urban League, was born on November 22, 1941 in Washington, DC.  Raised in a middle-class home by his parents, Charlotte Schuster and Kline Price,  Price became aware of racial struggles and the importance of activism as a child.  He began his schooling in a segregated elementary school and graduated from an integrated high school.  His parents were involved in the early litigation which would lead to Brown v. Board of Education decision in 1954.

Price graduated with a BA from Amherst College in 1963 and married Marilyn Lloyd that same year.  He entered law school at Yale in New Haven, graduating in 1966. New Haven became Price’s home, as he became an attorney with the New Haven Legal Assistance Association in 1966, and then with Cogen, Holt and Associates in 1970.  In both positions Price focused on supporting low-income clients.  Although never directly involved with the civil rights movement of the 1960s, Price spent much of his life working to improve the lives of impoverished urban blacks.

In 1977, Price moved to New York City, where he was hired as an editorial writer for the New York Times.  His editorials focused primarily on issues concerning race and poverty.  In 1982, Price became the senior vice president and director of the production for WNET-TV in New York City. Six years later, in 1988, he became vice president of the Rockefeller Foundation, which funded projects to better communities and lives of disadvantaged people.  Price worked heavily with the Special Initiatives and Explorations grant fund to improve the welfare of people of color through school reform and equal opportunity projects.  His experience at the Rockefeller Foundation led the National Urban League to recruit him as president.

In 1994, when Price became president and CEO of the National Urban League, the 84-year-old organization was on the decline.  Price played a crucial role in reviving the League, making it, once again, a leading organization in social justice activism.  Up until Price’s presidency, the League had focused primarily on preparing rural African Americans for life in the cities.  Recognizing that the great migration of southern blacks to northern cities was over, Price reoriented the goals of the organization. He focused on three principle initiatives: education and youth development programs, economic empowerment, and inclusionary programs. These initiatives, in turn, promoted the League’s new priority, addressing intergenerational urban poverty and the growing urban underclass.  While at the League, Price also created related programs, most notably the Campaign for African American Achievement and the Institute of Opportunity and Equality.  Hugh Price left the National Urban League in 2003 and retired in 2005.