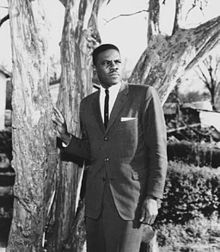 Born April 26, 1920 in Wampee, South Carolina, Golden Asro Frinks is known for his activism during the Civil Rights Movement and his work with the Southern Christian Leadership Conference (SCLC). When Frinks was nine, his family, including ten other siblings, moved to Tabor City, North Carolina where his father Mark Frinks worked as a millwright and his mother Kizzie Frinks as a domestic servant. His father died shortly following their move, making his mother the family’s sole parent. Her role led to Frinks’s dedication to helping those in his community.

At sixteen, Frinks joined the U.S. Navy and moved to Norfolk, Virginia. By this time, he had completed tenth grade and had a job on the naval base. There he joined the local Black Democratic Club and first worked with the National Association for the Advancement of Colored People (NAACP).

In 1942, Frinks married Mildred Ruth Holley, whom he met on his way to Norfolk. Shortly after he rejoined the military, voluntarily enlisting in the U.S. Army in World War II. During the war, he served as a staff sergeant at Fort McClellan, Alabama where he saw the inequality between blacks and whites. Despite having served his country, Frinks still did not have the right to vote when he returned home to North Carolina after the war.

Frinks used the money from the GI Bill to enroll in the Scurlock School of Photography in Washington, D.C. in hopes of bettering his family’s economic status. He lived in Washington, D.C. for six years, and upon moving back to his family in Edenton in 1954, he used the tactics he learned in D.C. to combat racism in his hometown. He also led one of the first large scale protests with children similar to the SCLC inspired demonstrations in the 1963 Birmingham Children’s Crusade.

Frinks worked to desegregate Edenton until 1964. During this time, he led mostly children in protesting segregated public spaces. He also led demonstrations to hire black policemen on the Edenton police force and to desegregate the public library. Frinks was recognized nationally for his efforts in 1962 when Martin Luther King Jr., came to Edenton to support the civil rights campaign he organized. After that visit, Dr. King delegated Frinks to be one of the twelve SCLC Field Secretaries nationwide. This job required Frinks to oversee desegregation throughout southeastern states. Frinks also was one of the main organizers of the 1963 March on Washington.

Frinks worked with many other desegregation movements including a children’s protest in Williamston, North Carolina in 1963. After the assassination of Martin Luther King Jr. in 1968, he participated in a boycott for the desegregation of the Hyde County school district. The boycott lasted through the entire 1968-1969 school year. Frinks also applied Dr. King’s non-violent protest philosophy in hopes of influencing prison reform, environmental justice, and American Indian rights.

For this activism and community service Frinks received many awards,  including the Edenton Movement Award, the Rosa Parks Award, and the Hyde County NAACP President’s Award.

Golden Asro Frinks died on July 19, 2004 in Edenton, North Carolina. He was 84.  Frinks was survived by his wife, Ruth, and daughter, Goldie Ann.