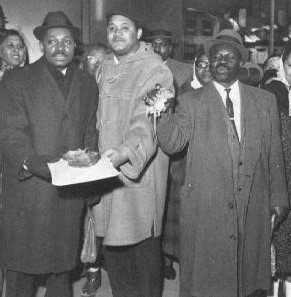 Jesse Gray is best known for his leading the Harlem Tenant Council in the 1960s. Born May 14, 1923 in Junica, outside Baton Rouge, Louisiana to parents Samuel Gray and Lottie Clarke, Gray had nine other siblings. He attended Xavier College, an all-black catholic college in New Orleans and then joined the Merchant Marine during World War II where he became a leader in the National Maritime Union (NMU). While working as a merchant marine and NMU organizer, his global travels introduced him to many social justice movements including Scotland’s Tenant Movement.

Gray settled in New York City in the early 1950s and began to organize local protests with groups such as the Harlem Tenants Council and Harlem Tenant and Welfare Council. Most of his protests were not specifically rent strikes, but rather vivid publicity events such as the “Rats to Rockefeller” campaign. In 1964, Gray encouraged people to mail rubber rats to New York Governor, Nelson Rockefeller, to demand more support for public housing. Gray also called on the Red Cross to declare lower Harlem a “disaster area” because of the number of families living in inhumane conditions. Because of his activism, Gray was arrested and beaten by police as city officials worked to prevent him from organizing rent strikes. They were unsuccessful.

In 1963, Gray led the most famous of the tenant strikes in Harlem, New York to protest the “sub-human” living conditions. Beginning in November thirteen families living in slum housing on 117th street withheld rent. The strike ended in a standoff. On December 30, 1963, these tenants were expected to appear in Manhattan Civil Court to defend themselves against the landlords who ordered their evictions. With news media looking on, they brought rats, both dead and alive, to the court to demonstrate terrible living conditions that the property owners subjected them too. They also presented evidence that the heat, electricity, working plumbing, and rodent extermination were routinely denied them. Their cases were dismissed and for the first time the entire city of New York was exposed to the tenants’ plight.

On February 15, 1964, Jesse Gray pressed the New York state legislature to assist impoverished renters in New York City slums. He called on both the state and federal government to address these conditions. He called on government to improve housing access for poor people of color instead of only fixing the most visible housing problems.

In 1969 Gray decided to quit his work as a tenant activist and pursue elective office believing it would bring more effective help to Harlem’s poorest residents. He ran unsuccessfully for the City Council in 1969 and the following year challenged longtime Harlem Congressman Adam Clayton Powell in the Democratic primary.  In 1972 he was elected to the State Assembly but was defeated in in 1974.

Gray married wife Rosa Brown in 1947 and the couple had two children together, son, Jesse Jr, and daughter, Gail.  Jesse Gray died on January 2, 1988 in Harlem at the age of 64 after being in a coma for several years.