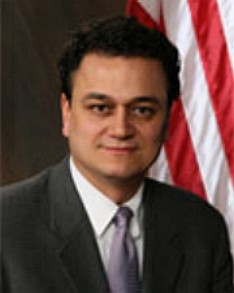 Gordon Fox is an American politician and the former Speaker of the Rhode Island House of Representatives. Elected in November 1992, he was the first openly gay African American to serve in a State Legislature, and the first openly gay state Speaker of the House in the United States. Under Fox’s tenure, the Rhode Island legislature legalized same-sex marriage. Fox unceremoniously resigned his position as Speaker on March 22, 2014, after the FBI raided his home and office, revealing he had embezzled $108,000 in campaign donations, and received $52,000 in bribes. In March 2015, he plead guilty to misuse of campaign funds, accepting a bribe, wire fraud, and filing a false tax return. On June 11, 2015, Gordon Fox was sentenced to three years in prison.

Fox was born December 21, 1961, in Providence, Rhode Island, to a Cape Verdean mother and an Irish-American father. He earned his bachelor’s degree in History and Political Science from Rhode Island College, and his law degree from Northeastern University Law School, in Boston. After an unsuccessful attempt at running for Providence City Council in the mid-1980s, Fox worked on State Representative Rick Berman’s and State Representative Patrick J. Kennedy II’s respective campaigns.

In 1992, he successfully ran as a Democrat for the Rhode Island House of Representatives; once he was elected, he represented Rhode Island’s 4th District, made up mostly of Providence’s East Side. In 1996, he began working as an assistant city solicitor in Providence, and he was appointed to the Board of Licenses by Providence Mayor Buddy Clanci in 2001. That same year, he became the Chairman of the House Finance Committee, and in 2002 he was elected House Majority Leader.

In an impromptu speech during a rally in support of same-sex marriage in 2004, Fox publicly came out, and announced he had been in a relationship with a man for six years. He was the only openly gay member of the Rhode Island State Legislature at the time. In 2006, he became Vice-President of the Board of Licenses, but resigned in 2009, after House Speaker William J. Murphy nominated him to be his replacement as Speaker. On February 11, 2010, Fox was elected Speaker of Rhode Island’s House of Representatives. During his time in office, he worked to pass a statewide smoking ban and a historic tax credit program. He also faced considerable scrutiny for the Assembly’s passage of a $75-million loan to 38-Studios, a videogame production company that later defaulted on the loan.

During his time on the Board of Licenses, Fox accepted $52,500 in bribes from owners of a Providence bar in exchange for helping them get a liquor license, and he took $108,000 from his campaign fund between 2008 and 2014, using the money on personal expenses, then filing false reports with the Rhode Island Board of Elections. He was ordered to prison on July 7, 2015; he was also ordered to pay $109,000 in restitution, and back taxes to the IRS.

In 2013, Fox married Marcus LaFond, his partner since 1998. Fox is currently wrapping up his three-year stint in Canaan U.S. Penitentiary in Waymart, Pennsylvania.