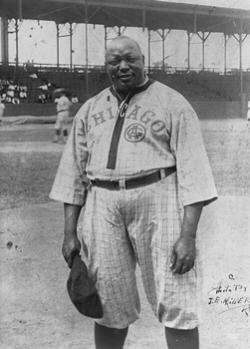 Andrew Rube Foster was born in Calvert, Texas, on September 17, 1879.  The son of Andrew and Sarah Foster, Rube started a baseball tradition that would be followed by his brother Willie Bill Foster.  Rube quit school after the eighth grade, barnstorming with the Waco Yellow Jackets, an independent black team in 1897.  By 1902, Rube’s baseball abilities gave him an opportunity to play with the Chicago (Illinois) Union Giants.  After a short stint with Union Giants, Rube played for the Cuban X-Giants.  In 1903, Rube Foster was the top pitcher in black baseball, and was the pitcher of record as the Cuban X-Giants won the Black World Series.  Rube sometimes played with white semi-pro teams and exhibition games against white players. Rube established himself as the premier pitcher challenging major league pitchers such as Rube Waddell, Chief Bender, Mordecai Brown, and Cy Young.  Honus Wagner stated that Rube Foster was one of the greatest pitchers of all times and one of the smartest pitchers he had ever seen.

Even as great as Rube Foster’s pitching performance was, he would gain his greatest fame as a baseball manager and organizer of the Negro National League.  In 1907, Rube began his career as a player-manager with the Chicago Leland Giants, leading them to a 110-10 record.  In 1920 Foster, owner and manager of the Chicago American Giants, organized the Negro National League which became the first stable and financially successful black baseball league. Rube Foster, who made an indelible imprint on baseball, left the game in 1926 as a result of mental illness and died on December 9, 1930 in Kankakee, Illinois.  Andrew Rube Foster was inducted into the Baseball Hall of Fame in 1981.