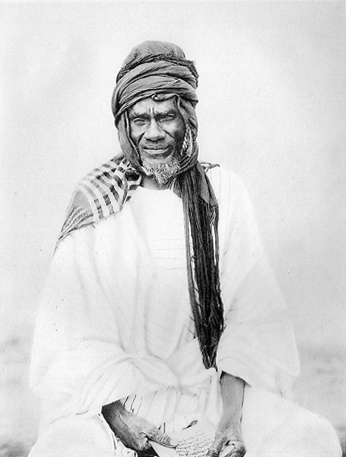 Warrior king, empire builder and hero of the resistance against the French colonization of West Africa during the 19th century, Samori Touré was born around 1830 in the Milo River Valley in present-day Guinea. His father was a trader, leading Touré to follow his family’s occupation early on. In the 1850s, he enrolled in the military forces at Madina (present-day Mali) to liberate his mother, who was a member of the Malinké ethnic group, captured during a raid. He subsequently acquired military skills during various campaigns he undertook for local chiefs before starting his own career.

Touré became a well-known leader, training and commanding a growing and disciplined army. He expanded his conquests, building a united empire called Mandinka. By 1874, he declared himself Faama (monarch), and established the capital of his kingdom at Bisandugu in present-day Gambia. In the 1880s, the empire expanded from Bamako, Mali, in the north, to the frontiers of British Sierra Leone, the Ivory Coast, and Liberia in the east and south. The Sudan was the eastward frontier. Touré’s empire reached its apogee between 1883 and 1887, a period in which he took the title of Almami, meaning the religious head of a Muslim empire.

After the 1884 Berlin Conference which partitioned Africa, French forces began encroaching on Mandinka.  Although his army initially defeated the French, between 1885 and 1889 their military forces, which often included Senegalese troops, succeeded in pushing him further into the West African interior.   After several confrontations, Touré in 1889 concluded various peace treaties with the French forces.

In December 1891, increasing French incursions into Touré’s empire led to the exodus of the entire nation eastward.  Between 1893 and 1898, Touré’s army conquered vast territories in present day Northern Ivory Coast.  Toure formed a second empire and established its new capital in the city of Kong, Upper Ivory Coast.

On May 1, 1898, when the French seized the town of Sikasso, just north of the new empire, Touré and his army took up positions in the Liberian forests to resist a second invasion.  This time, however, famine and desertion weakened his forces and the French seized Touré on September 29, 1898, in his camp at Guélémou in present-day Ivory Coast.  Touré was exiled to Ndjolé, Gabon, where he died of pneumonia on June 2, 1900.