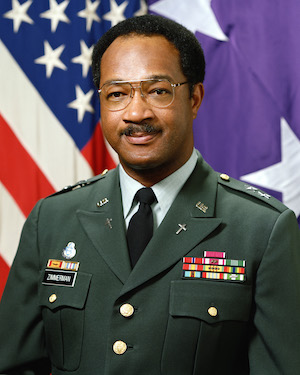 Chaplain (Major General) Matthew Augustus Zimmerman Jr. is a retired American Army officer who served as the 18th Chief of Chaplains of the United States Army from 1990 to 1994. He was the first African American to hold this position. Zimmerman was born on December 9, 1941, in Rock Hill, South Carolina. He attended a Baptist church where his father, the Reverend Matthew A. Zimmerman Sr., was a pastor. Zimmerman also attended an elementary school where his father was the principal. His mother, Alberta Zimmerman, taught him in the first grade.

At age sixteen, Zimmerman graduated from Sims High School in Union County, South Carolina, as class valedictorian. He then enrolled in Benedict College where he earned a degree in biology and chemistry in 1962. Zimmerman, who originally wanted to attend medical school, enrolled instead in the Duke University Divinity School on a fellowship. In 1965 he became the first African American to earn a Master of Divinity degree from Duke University. Later that year, he was ordained by the National Baptist Convention, Inc. USA.

Matthew Zimmerman entered the Army on March 21, 1967, with a commission as first lieutenant. He completed the Chaplain Officer Basic Course at the U.S. Army Chaplain School in Fort Hamilton, New York, and was then assigned as chaplain with the U.S. Army Training Center (Infantry) at Fort Gordon, Georgia. In January 1968, Zimmerman was sent to South Vietnam as assistant chaplain with the United States Military Assistance Command. There he was promoted to captain, helping orphanages collect clothing and other needed supplies.

Between 1969 and 1974, Zimmerman ministered to soldiers and their families at Fort Hood, Texas, with the 1st Armored Division; in West Germany with the 3rd Armored Division, U.S. Army, Europe, and the Seventh Army. He was promoted to major on October 3, 1974, while a student in the Chaplain Officer Advanced Course at the U.S. Army Chaplain Center and School located at Fort Wadsworth, New Jersey. In 1975 Zimmerman received a Master’s Degree in Education from Long Island University in New York. In June 1975, he joined the Office of the Chief of Chaplains, U.S. Army in Washington D.C. as an operators’ training staff officer. Three years later, he returned to Europe as deputy corps chaplain with VII Corps and the Seventh Army.

On August 6, 1979, Zimmerman was promoted to colonel. In July 1980, he was named division staff chaplain with the 3rd Infantry Division, U.S. Army, Europe, and the Seventh Army, but in June 1982, he returned to the United States to attend the U.S. Army War College at Carlisle Barracks, Pennsylvania. The following year, Zimmerman took on duties of assistant command chaplain, U.S. Army Training and Doctrine Command at Fort Monroe, Virginia.

On July 1, 1984, Zimmerman was appointed command staff chaplain at Forces Command (FORSCOM), Fort McPherson, Georgia. In August 1989, he served as deputy chief of chaplains for the Army. Zimmerman was promoted brigadier general on October 1, 1989 and to major general on August 1, 1990. That same year, he also became the first African American chief of chaplains for the Army.  In 1994 Zimmerman retired from the Army as major general. Zimmerman is a member of Omega Psi Phi fraternity.