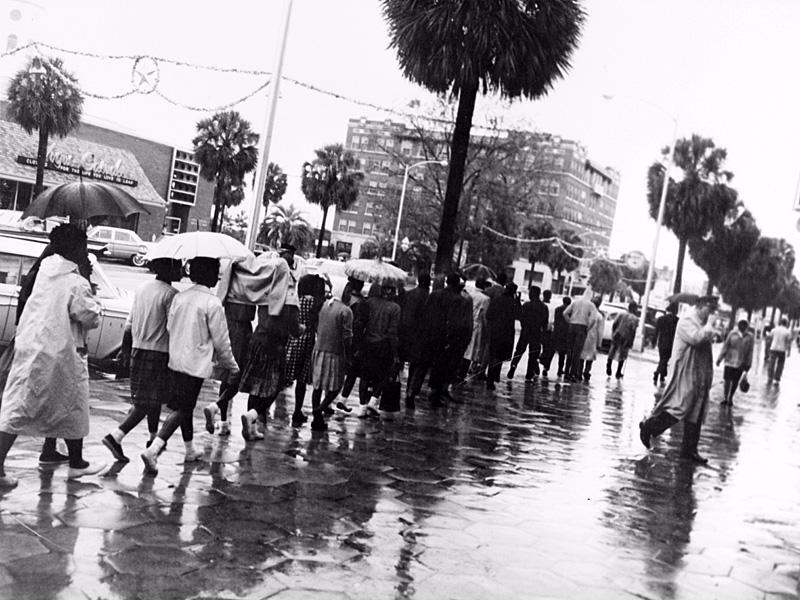 The Albany Movement was a desegregation campaign formed on November 17, 1961, in Albany, Georgia. Local activists from the Student Nonviolent Coordinating Committee (SNCC), the National Association for the Advancement of Colored People (NAACP), the Ministerial Alliance, the Federation of Woman’s Clubs, and the Negro Voters League joined together to create the movement. The Albany Movement challenged all forms of racial segregation and discrimination in the city. Martin Luther King Jr. and the Southern Leadership Conference (SCLC) joined the movement in December 1961.

SNCC members Charles Sherrod and Cordell Reagon traveled to Albany in October 1961 to help organize the local black community. Although earlier protests had occurred, black residents were frustrated with the city commission’s failure to address their grievances. Sherrod and Reagon organized workshops around nonviolent tactics for Albany’s African American residents in anticipation of a showdown with the local police. On November 1, 1961, when the Interstate Commerce Commission (ICC) ban on racial segregation in interstate bus terminals went into effect, Sherrod and Reagon saw it as an opportunity to test segregation polices. They sent nine students from Albany State College to conduct a sit-in at the bus terminal. None of the students was arrested, but their actions inspired local black leaders to join the movement.

The Albany Movement intended to end all forms of racial segregation in the city, but it initially focused on desegregating travel facilities. It also formed a biracial committee to discuss further desegregation and called for the release of those jailed in earlier segregation protests. Movement protestors used mass demonstrations, jail-ins, sit-ins, boycotts, and litigation. Although the first protestors were mostly students, the campaign eventually involved large numbers of black adults of varied class backgrounds.

Laurie Pritchett, who was the Albany police chief, responded to the protest demonstrations with mass arrests of the protesters. By December 1961, when more than five hundred protesters were jailed, William G. Anderson, the first president of the Albany Movement, called on Dr. Martin Luther King Jr. to help reinvigorate the stalled campaign. Some SNCC members were concerned about King’s involvement, worrying publicly that his style of leadership would cause local blacks to abandon their own efforts against racism and exploitation, thinking that only a prominent outside leader could save them.

King arrived in Albany on December 15, 1961, and spoke at a mass meeting at Shiloh Baptist Church. The following day, King, Anderson, and Ralph Abernathy—the SCLC’s second-in-command—joined hundreds of black citizens behind bars on charges of parading without a permit and obstructing the sidewalk. Despite SNCC’s fears, King’s involvement in the movement did attract national media attention, and it inspired more members of the black community to join the protests. Soon after King was arrested, city officials and Albany Movement leaders agreed that if King left Albany, the city would comply the ICC ruling and release jailed protesters on bail. After King left Albany, the city failed to uphold its agreement and protests continued into 1962.

On July 10, 1962, King and Abernathy were found guilty of having paraded without a permit in December 1961 and were ordered to pay $178 or serve forty-five days in jail. They chose to stay in jail, hoping their imprisonment would again draw attention to the Albany Movement. On July 12, however, Chief Pritchett notified King and Abernathy that their bail had been paid by an unidentified black man, and they were immediately released. On July 27, 1962, King was arrested for a third time, but on August 10, 1962, he agreed to leave Albany, ending his involvement in the Albany Movement. Although SNCC continued its efforts in Albany, almost all of Albany’s public facilities remained segregated after King’s departure.