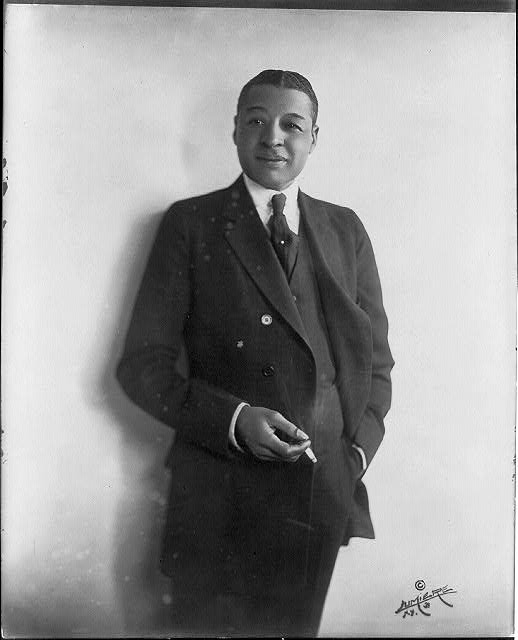 Egbert Austin “Bert” Williams was born in New Providence, Nassau on November 12, 1874. When he was eleven or twelve his family settled in Riverside, California, and it was not long before Williams became attracted to show business. In 1893, Williams got his start in show business and one of his first jobs was with a minstrel group called Martin and Selig’s Minstrels. While in this group Williams met George Walker, a song-and-dance man with whom Williams soon formed an illustrious partnership called Williams and Walker.

Throughout his career Williams achieved many firsts. In 1901, he became the first African American to become a best-selling recording artist. In 1902, he became an international star with his performance in the show In Dahomey, the first black musical to be performed on Broadway. Also, in 1910 Williams became the first black actor to be regularly featured in a Broadway revue when he joined the Ziegfeld Follies, and he eventually claimed top billing for the show.

Despite Williams’s superstar popularity, many people still refused to look past the color of his skin. As a comedian and songwriter, he was loved by both blacks and whites, yet he often faced racism in restaurants and hotels when he was not performing. Williams also was forced to perform in blackface makeup and he could not escape playing stereotypical characters in his performances. Still, Williams was one of the most important pioneers for African American entertainers, and after his death on March 4, 1922 the Chicago Defender insisted that “No other performer in the history of the American stage enjoyed the popularity and esteem of all races and classes of theater-goers to the remarkable extent gained by Bert Williams.”