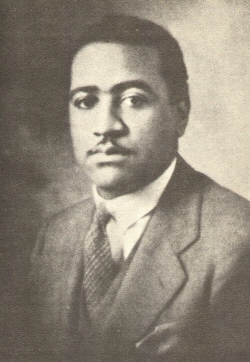 A major figure in Harlem community politics and the Communist Party during the 1930s and 1940s, Benjamin Davis, Jr. was born into a prominent African American family in Atlanta, Georgia in 1903. He migrated north to Massachusetts to attend college at Amherst, where he was an all-American football player, and in 1932 graduated from Harvard Law School. After returning to Atlanta to practice law, Davis rose to national prominence as the lead attorney for Angelo Herndon, a black Communist charged under an archaic slave law with inciting insurrection after he attempted to organize unemployed workers. The experience radicalized Davis, who was impressed with the Communist Party’s commitment to racial justice and joined the Party during the trial.

Amid threats on his life in the aftermath of the Herndon trial, Davis moved to Harlem in 1934 where he replaced Cyril Briggs as editor-in-chief of the Harlem Liberator. Davis’ arrival was part of a larger transition in Harlem Communist Party leadership as the first generation of black Communists, led by West Indian-born nationalist revolutionaries like Briggs and Richard Moore, gave way to American-born blacks like Davis and James Ford who advocated more rigid Party discipline and closer, more pragmatic alliances with white workers.

Davis quickly became a popular figure both inside the Party and in the community. He was appointed to the Communist Party’s National Committee and played a key role in building the Popular Front organization, the National Negro Congress. He also helped organize a number of community-centered campaigns against racial discrimination including protests for improved housing and employment. In 1942, running on the Communist Party ticket, Davis was elected to fill Adam Clayton Powell’s seat on the New York City Council. Following a successful second term on the city council from 1945-1948, Davis fell victim to the post-war “Red Scare.” Along with several other members of the Communist Party National Committee, he was prosecuted under the Smith Act and sent to federal prison. After his release Davis returned to Harlem but could never regain his former influence in the changed political atmosphere of the Cold War.