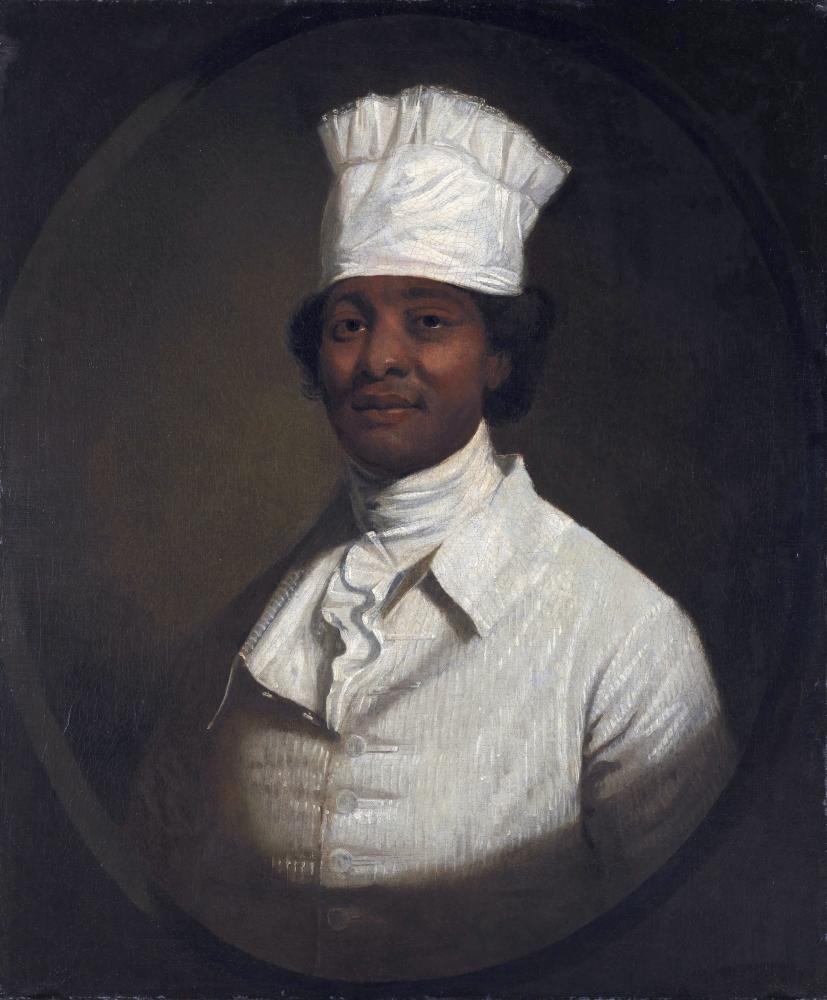 Hercules Washington was the enslaved head cook at George Washington’s Mount Vernon plantation home where he prepared meals for decades for the Washington family and the guests who visit the mansion. Hercules was most likely born in 1755 somewhere in Virginia although the exact place of birth and names of his parents are all unknown. What is known that until 1789 he lived almost all of his life on the Mount Vernon plantation. Hercules did marry.  He had a wife named Alice and the couple had three children, Richmond, Evey, and Delia. Hercules Washington, his wife, and three children were listed in the February 1786 Mount Vernon Slave Census. His wife, Alice, died the following year in 1787.

In 1789, Hercules was one of nine enslaved Africans that newly elected United States President George Washington brought with him to Philadelphia, Pennsylvania which was at the time the national capital.  Hercules was to be the first cook in the official presidential household.  There he prepared all of the meals for President Washington, his family, his private and official guests. George Washington Parke Custis, George Washington’s step grandson and ward (and father-in-law of Robert E. Lee) mentioned Hercules in his 1859 memoir.  Here he describes Hercules as being a celebrated “artist” who was highly accomplished in the culinary arts. Hercules had special privileges that include selling leftovers from the presidential kitchen to an eager public. These sales generated a salary of nearly 200 dollars a year during George Washington’s terms in office.

Despite his privileges and special status as Washington’s cook, Hercules Washington became one of only a few enslaved people ever to successfully run away from George Washington to secure his freedom.  He escaped to freedom in Pennsylvania on March 10, 1797.  Different accounts attempted to explain why he ran away. According to Stephen Decatur, Jr. who was a descendant of Washington’s personal secretary, Tobias Lear, and who wrote the book “In the Private Affairs of George Washington” (1933), Hercules escaped to freedom at the end of the Washington presidency when the now former President left Philadelphia to return to Mount Vernon.  Hercules, staying behind to help with the return of Washington’s effects to Virginia, decided that this was the opportune time to make his escape.  Another account suggested that when Hercules found out he would be made a regular laborer upon returning to Mount Vernon rather than continue as Washington’s cook, he decided to run away.

When Washington found out Hercules had escaped he ordered him found and brought to Mount Vernon.  Hercules however was never located or returned to slavery.  Two years later in 1799 upon his death, Washington freed all his slaves through his will including ironically Hercules who was still listed as his property.  A December 15, 1801 letter that reached Martha Washington indicated that Hercules was living in New York City, New York.

The family of Hercules Washington, however, remained enslaved since his children were owned by Martha Washington and thus were part of the estate of her first husband, Daniel Parke Custis.  George Washington’s will had no effect on those enslaved people who comprised the majority of bondservants at Mount Vernon at the time of his death.

Hercules Washington’s later life and place of death are unknown. The most famous portrait of Hercules was by the American painter, Gilbert Charles Stuart.