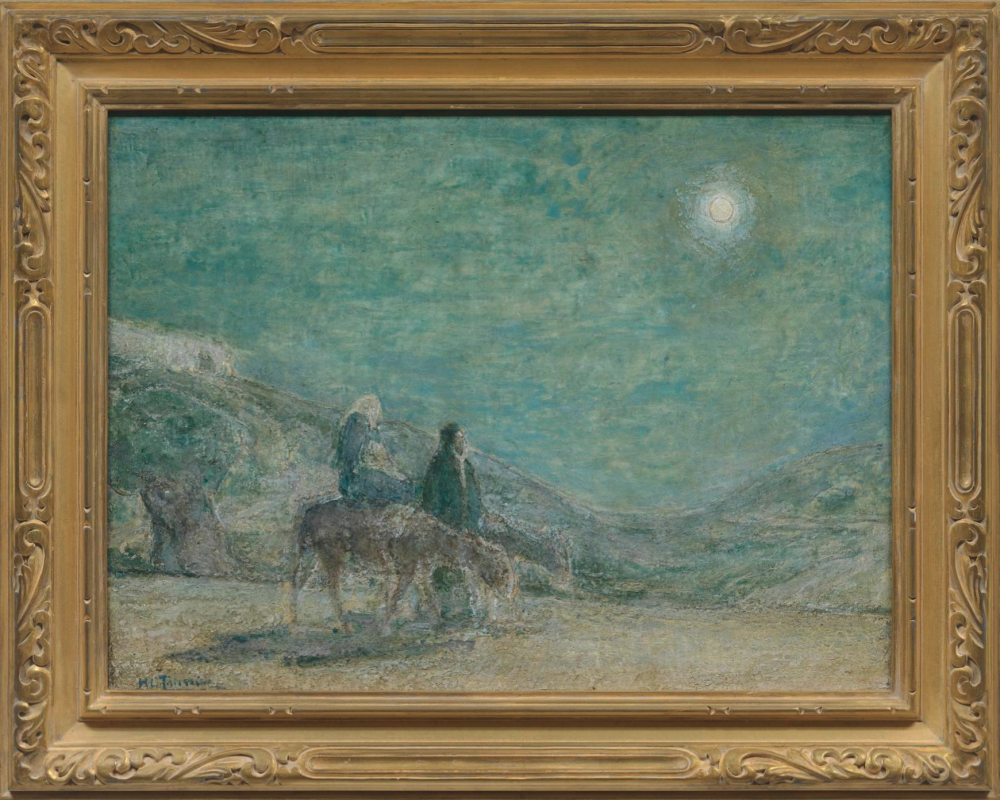 In the following article sociologist and African American Studies professor Patricia A. Banks describes the rise of private art collectors and collections among African Americans. Her article also shows the growing acceptance of African American art and artists in major museums and galleries across the nation.

On October 16, 1943 Henry Ossawa Tanner’s painting Flight into Egypt (see illustration) was hanging in the entrance hall of a home located at 127 Randolph Place in Washington, D.C. The occasion was the opening of the Barnett-Aden Gallery which was founded by James Herring, an artist and art professor at Howard University along with Alonzo Aden, curator of the University’s Gallery of Art. Works such as Jacob Lawrence’s watercolor Trees, Aaron Douglas’s painting Alta Knitting, and Lois Mailou Jones’s painting Still Life with Green Apples, were also displayed in the inaugural exhibition. During the next two decades Aden and Herring held gallery shows in Aden’s Washington home and purchased works from each exhibition for the Barnett-Aden Collection. Herring and Aden were part of a long tradition of African Americans who individually, and in partnership with black and non-black family members, collected work by African American artists. They were also among a distinct group of collectors who acquired work by African American artists and shared it with the public. These publicly oriented collectors presented their chosen treasures to the community by opening their homes, loaning works for exhibitions, and making donations to museums. In doing so they played an important role in shaping the value of African American art.

While many observers believe that the value of art is determined by its intrinsic properties, in reality what separates great art from less valued art is partly influenced by societal arrangements. Rare and unusual talent is not enough to vault an artist from obscurity to the spotlight. For art to be recognized as worthy it must have champions, such as collectors, who nudge it forward to be granted entrance into the canon. For several decades, the public patronage of African American collectors has played a critical role in the valorization of art by African American artists. Their commitment to these artists took on added significance because race has often made the path to consecration especially challenging for artists of African descent.

Collectors such as Arturo Alfonso Schomburg (aka Arthur Schomburg) helped to sustain and memorialize visual art from the Harlem Renaissance. During this period of cultural flowering and emergent racial consciousness in the 1920s, Schomburg amassed a large collection of artifacts and art. Like other collectors of this and future eras, Schomburg was determined to excavate and preserve the historical and cultural contributions of African Americans. Concerned about the financial prospects of black artists, Schomburg purchased prints by artists such as Albert Alexander Smith and William Ernest Braxton. Combining his passion for history with his interest in art, he commissioned Braxton to create etchings of historical figures like Frederick Douglass. Schomburg’s private collection became public patrimony in 1926 when the Carnegie Foundation agreed to purchase the collection for the 135th Street Branch of the New York Public Library. The collection was housed in the Harlem library’s Division of Negro Literature, History, and Prints. The Division of Negro Literature, History, and Prints would in 1940 be renamed the Schomburg Collection of Negro History and Literature in honor of this early collector.  In subsequent decades the library was given its current name of the Schomburg Center for Research in Black Culture.  Other collectors such as poet Countee Cullen also helped to sustain the visual production of the Harlem Renaissance. A central literary figure in this cultural movement himself, Cullen collected the work of his friends such as Augusta Savage, Palmer Hayden, and Hale Woodruff.

In the 1960s and 1970s the political forces that were transforming all other sectors of American life also rocked the art world.  The African American museum movement was in its infancy and institutions such as the Studio Museum in Harlem, founded in 1968, began to appear in major cities across the United States. Protesters also picketed outside major museums like the Whitney Museum of American Art to publicly contest the lack of diversity in exhibitions and acquisitions. Black artists in groups such as Spiral created work that responded to shifts in the sociopolitical order. Detroit, Michigan gallerist George N’Namdi, who started his personal collection in the 1960s, describes how the political spirit of the day informed his collecting ethos: “One of the reasons I started collecting was that the rebellion of the 60s induced in me this strong desire to preserve the culture of African-American people and I began to wonder specifically how I could preserve the culture through supporting and preserving visual arts, theater, dance and so on.”

Paul Jones of Atlanta, Georgia first started acquiring art in 1967. He made a commitment to focus on African American artists after noticing that they were rarely represented by galleries and their work had scant representation in museum exhibitions and collections. Among Jones’s first acquisitions were works that he selected from the Atlanta University Annual Exhibition of Paintings, Sculpture and Prints by Negro Artists. The Atlanta Annuals, which ended soon after Jones started collecting, was one of the few juried art shows for African American artists during the course of its run from 1942 to 1970. In the 1970s The Barnett-Aden Collection, which was then under the care of Adolphus Ealey, was shown at the Corcoran Gallery in Washington, D.C. The Collection was also exhibited at two institutions that were part of the first wave of the black museum movement—the Anacostia Neighborhood Museum in Washington, D.C. and the Afro-American Historical and Cultural Museum in Philadelphia, Pennsylvania.

In the late 1990s John and Vivian Hewitt sold their collection of African American art to NationsBank (which in 1998 merged with Bank of America). The bank pledged the collection to the Afro-American Cultural Center (now the Harvey B. Gantt Center for African-American Arts + Culture) in Charlotte, North Carolina. In the years prior to the cultural center’s re-opening the Hewitt collection toured nationally. The Barnett-Aden collection was also the leading collection for a newly founded African American museum. In 1989 the Florida Education Fund purchased the collection for the Museum of African-American Art in Tampa, Florida. After the museum closed, Washington D.C. entrepreneur Robert L. Johnson, co-founder of Black Entertainment Television (BET), bought the collection in 1998.

Significant public patronage by collectors of African American art continued into the 21st century. For over a decade the African American art and artifacts collection of Bernard and Shirley Kinsey of Los Angeles, California has toured nationally. The Pamela J. Joyner and Alfred J. Giuffrida Collection in San Francisco will embark on a national tour in Fall 2017. This collection is distinguished by its focus on abstract work by artists from the African Diaspora such as Norman Lewis, Alma Thomas, and Mark Bradford.

On September 24, 2016 efforts to establish a national African American museum were realized when President Barack Obama presided over the grand opening of the National Museum of African American History and Culture (NMAAHC) in Washington, D.C. A year earlier, Robert L. Johnson, a member of the museum’s council, donated works from the Barnett-Aden Collection to the museum. Among the works finding a new home at NMAAHC was Tanner’s Flight into Egypt which was hanging in the entrance hall when the Barnett-Aden gallery opened almost a quarter-century prior.