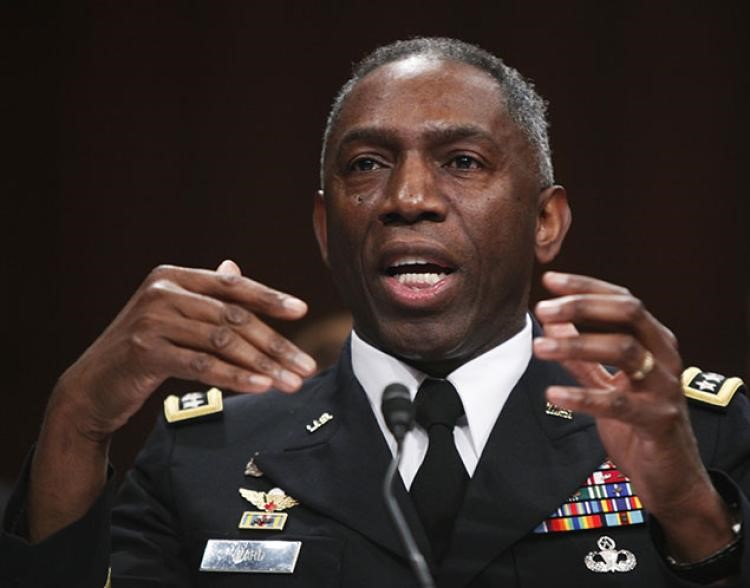 William E. “Kip” Ward is a former 4-star general.  War was born in Baltimore, Maryland on March 6, 1949 to Richard Isiah Ward and Phyllis Mary Ward.  He graduated from Morgan State University in 1971 with a bachelor’s degree in political science. He was a distinguished ArmyROTC cadet at Morgan State and received his officer’s commission there upon graduation. Ward’s first military assignment was as a rifle platoon leader with the 82nd Airborne Division at Fort Bragg in North Carolina. Soon after, he reported for duty in South Korea.  By 1979, he had returned to the United States and earned a master’s degree in political science at Pennsylvania State University.  At that point he began a three-year stint as an assistant professor of political science and public policy at the United States Military Academy at West Point in New York.

From 1982 to 2002, Ward served in varied leadership positions and had tours of duty abroad in Egypt, Somalia, Bosnia, Germany, and Israel. He also had a stateside administrative duty at Fort Wainwright in Alaska, Fort Drum in New York, the Schofield Barracks in Hawaii, and in Washington, D.C. where he served as the Army’s Vice Director for Operations of the Joint Staff. He also attended the United States Army Command and General Staff College at Fort Leavenworth in Kansas and the United States Army War College at Carlisle Barracks in Pennsylvania.

In 2005, Ward became Deputy Commanding General and Chief of Staff of the United States Army in Europe and the Seventh Army. It was in this high-profile position that he was noticed by the U.S. Secretary of State Condoleezza Rice.  Rice selected Ward to serve for three months as the U.S. Security Coordinator of the Israel-Palestinian Authority. From 2007 to 2011, Ward served as the first Commander of U.S. Africa Command (AFRICOM) headquartered in Stuttgart, Germany.

Ward’s military career suffered a blow in 2012 when he was investigated for lavish, unauthorized spending of government money for himself, his wife, and staff members. A report by the General Inspector revealed that, among other things, he had employed military vehicles for his wife’s shopping trips, accepted a payment from a government contractor, charged the government for lengthy stays at fancy hotels; and used a five-vehicle motorcade to transport himself, his wife, and staff members to Washington, D.C.  Despite the recommendation of the chairman Martin Dempsey of the Joint Chief of Staff that Ward be reprimanded, U.S. Department of Defense Secretary Leon Panetta ordered Ward to be demoted to a three-star lieutenant general. Ward retired soon thereafter.

Once out of the U.S. Army Ward became President and Chief Operating Officer (COO) of Sentel Corporation, an engineering company that provides the U.S. government with a range of technical capabilities.  The company is headquartered in Alexandria, Virginia. Ward and his wife, Joyce A. Ward both reside in Reston, Virginia. They have two adult children, William Jr. and Kahni.