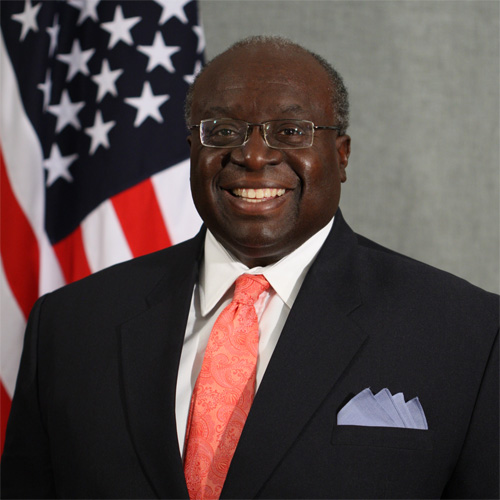 Though born in New York City, New York’s Harlem community, Harry Keels Thomas, Jr. was raised in a middle-class neighborhood in Queens where most parents were civil servants.   His mother was a social worker and his father, a World War II veteran, operated small businesses.  Thomas finished Brooklyn Technical High School and graduated from the College of the Holy Cross in Worchester, Massachusetts in 1978 with a degree in political science.  Upon earning a master’s degree in urban planning at Columbia University, he was employed for three years as an urban planner in the South Bronx.

Encouraged by his supervisor to investigate a career in the US Foreign Service, he passed the government exam and entered the Service in 1984, the same year he married jazz singer Ericka Ovette.  His first overseas assignment was as political officer at the US Embassy in Lima, Peru.  Later diplomatic postings were at Kaduna, Nigeria; Harare, Zimbabwe; and New Delhi, India.  By 2001 Thomas was in the White House serving under US National Security Advisor Condoleezza Rice as National Security Council director for South Asia.  In this capacity, he personally briefed President George W. Bush several times concerning boiling tensions between India and Pakistan.  In 2003, he arrived in Dhaka, Bangladesh for a two-year stint as US Ambassador.  Back in Washington in 2007, he was appointed as both Director General of the US Foreign Service and Director of Human Resources at the State Department.

In late 2009, Thomas was nominated by President Barack Obama to replace Kristie A. Kinney as U.S. Ambassador to the Philippines.  Following Senate confirmation, he presented his credentials to Philippines President Gloria Macapagal-Arroyo on April 27, 2010 at Malacañang Palace in Manila.

The primary focus of his ambassadorship, maintenance of a mutual defense treaty, dealing with matters pertaining to immigration, and promoting economic relations beneficial to both nations, dominated his daily routine.  In July and September 2013, near the end of his appointment, articles appeared in the Philippine Daily Inquirer describing his affinity for Filipino culture and detailing his year-long romance with Filipina business executive Mithi Aquino.

Thomas has cited what he considers two highlights of his diplomatic career: his efforts in the summer 2006 to evacuate of 15,000 American citizens from Lebanon and the role he played in extracting personnel from besieged United States embassies in Kosovo and Liberia.  Conversant in Spanish, Hindi, Bengali, and to some extent Tagalog, Thomas is a former trustee of the College of the Holy Cross and member of the Board of Governors of the National Defense University.  His recognitions include an honorary doctorate from Loyola University Maryland and the State Department’s coveted Arnold Raphael Award.