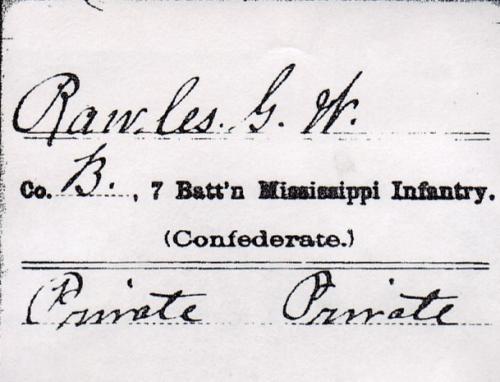 George Rawles was born in South Carolina to a young slave mother owned by Benjamin Rawles II.  At the age of 17 and now living in Perry County, Mississippi, he was given to his master’s son, Benjamin Rawles III to be his body servant during the Civil War. Both men enlisted in the Confederate Army into Company B, 7th Battalion Mississippi Infantry; Benjamin as an officer and George as a private. Although the Battalion engaged in several battles including the siege and surrender at Vicksburg, Mississippi in June 1863 and the siege at Atlanta, Georgia between July and September 1864, it is not known if George Rawles actually took up arms against the Union Army. Both he and his master Benjamin survived the war. Benjamin Rawles died in 1910.

Rawles married after the end of the Civil War. He and his wife, Jane, spent many years in South Carolina farming. They had nine children but only two survived to adulthood.  When news of the 1880 Lake County, Colorado mining boom reached South Carolina, the Rawles family migrated to Leadville, Colorado where George obtained a job as a hod carrier.

With the dwindling of mining jobs after 1893, George and Jane Rawles moved to Seattle where he worked as a street laborer for the city. After the death of Jane in 1907, he remarried the following year to Jane York. Very little is known about his life in Seattle other than his arrival in the city when he was 53 years old. George Washington Rawles died on May 22, 1922 in Tacoma, Washington.