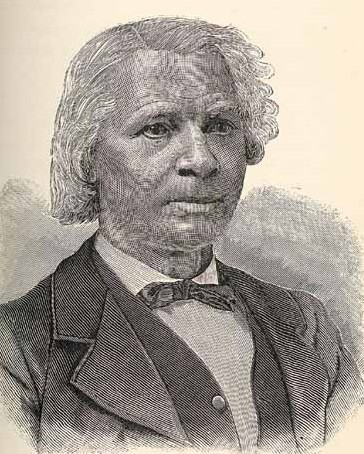 James Poindexter clergyman, abolitionist, politician, and civil rights activist, was born in Richmond Virginia in 1819. He attended school in Richmond until he was about sixteen when he started to apprentice as a barber. In 1837 Poindexter married Adelia Atkinson and the coupled moved to Columbus, Ohio where they remained for the rest of their lives.

Poindexter was a major supporter of the Underground Railroad in Ohio, personally supplying wagons and teams of horses to help fugitive slaves on their journey to Canada.  During the Civil War Poindexter and his wife formed the Colored Soldiers Relief Society to help give soldiers and their families’ assistance since the State of Ohio failed to support its black veterans.  As a well known minister in Columbus, Poindexter on August 1 of each year delivered the West Indian Emancipation Day Speech.

When the 15th Amendment allowed black voting throughout Ohio in 1870, Poindexter began his political career. In January 1871 he led the call for a statewide convention of African American men to encourage voting.  Two years later Poindexter was nominated by the Republican Party for a seat in the Ohio House of Representatives.  He lost but in 1880 he became the first African American elected to the Columbus City Council.  Reelected in 1882 Poindexter remained in the seat until 1884 when he was named to the Board of Trustees of the Ohio School for the Blind.  In 1884 Poindexter was also appointed to the Columbus Board of Education and was reelected four times. Poindexter was nominated by Democratic Governor George Hoardley to the Board of Ohio University but the nomination was blocked in the Ohio state legislature.  In 1887 he was named to the Board of Directors of the State Forestry Bureau and in 1896 he was appointed to the Board of Trustees of Wilberforce University, the African Methodist Episcopal (AME) College in Xenia, Ohio.

James P. Poindexter died on February 7, 1907 after a prolonged bout of pneumonia. His funeral was attended by nearly 2,000 people, making it one of largest in Columbus history.