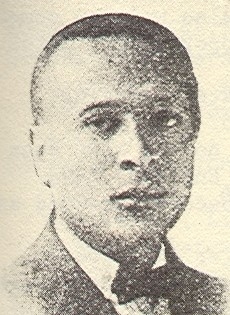 Leslie Pinckney Hill was an educator, author, poet, dramatist, and community leader. He was born in Lynchburg, Virginia on May 14, 1880 to Samuel H. Hill, a former slave, and Sarah E. Hill. He received his primary education in Lynchburg, where as a child he played the trumpet and visualized a career in music. His family eventually moved to East Orange, New Jersey, where he transferred to the local high school. Due to accelerated study, he was able to skip his junior year and graduated close to the top of his class in 1898.

Between 1904 and 1907 Hill taught at Tuskegee Institute. From 1907 to 1913 he served as principal of the Industrial Institute in Manassas, Virginia and then became the head the Institute for Colored Youth in Cheyney, Pennsylvania (the school was renamed the Cheyney State Teachers College in 1951). During his time at Cheyney State Teachers College (1913-1951), Hill raised funds for the school, updated its curriculum, and encouraged interracial understanding, most notably by working with the Quakers. Drawing in his musical skills, he also directed the Cheyney Chorus which performed at colleges around the country.  Under his administration, the school grew from 20 students to nearly 500 students and became an accredited state college.

After retirement, Hill lectured at the University of California at Los Angeles for two summers. He received the Seltzer Award for distinguished service after he served as administrator of Mercy-Douglass Hospital in Philadelphia for three years. In addition to his career in education, Hill was also a dramatist, poet and wrote several essays. He authored Jethro which was performed in 1931. He also wrote the poem, “the Teacher” which was translated into several languages. His most well known play, Toussaint L’ Ouverture, A Dynamic History was published in 1928 and had thirty-five scenes. In his essays, Hill expressed his views as an activist. In “What the Negro Wants and How to Get It” (1944), he described the aims of African Americans in the quest for citizenship and declared how to achieve that goal.

Throughout his career and after his retirement, Hill proved to be a talented community organizer and leader who believed education could be used to fight racism.  In 1944, he founded Camp Hope for underprivileged children in Delaware County.  He was also active in organizations such as the Interracial Committee of Pennsylvania and the National Education Association’s Committee on the Defense of Democracy through Education.

Leslie Pinckney Hill died of a stroke in Philadelphia in 1960.