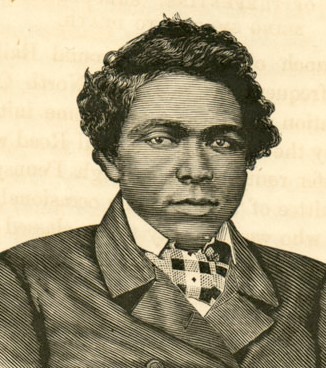 Abraham Galloway, freedom-fighter, spy, abolitionist, and politician, is an unsung hero of American history. Galloway was born a slave on February 8, 1837 in Smithville (now Southport), North Carolina, the son of an enslaved woman and a white boatman. Little is known about his youth, but in 1857 he hid in a boat and escaped to Philadelphia. From there he traveled to Canada via the Underground Railroad. A bright, industrious young man, he emerged as a leader in the abolitionist movement. He traveled throughout Canada and the free areas of the United States advocating for the abolition of slavery. Galloway’s hatred of slavery led him to travel to Haiti in 1860 with the intention of recruiting men to invade the American South. This was not a fruitful endeavor, and he returned to the United States at the outset of the American Civil War.

In 1861, Galloway began serving in the Union army as a spy for Major General Benjamin Butler. He was an advance supply scout who would reconnoiter Confederate territory prior to Union military action. He gathered much of his information from slaves he encountered while traversing the states of North Carolina, Louisiana and Mississippi. While scouting in Vicksburg, Mississippi, he was arrested and jailed but later escaped.

In 1863, he returned to the North, where he began recruiting Black men to enlist in the Union army. His efforts culminated in a meeting with President Lincoln on April 28, 1864, during which he argued for African American citizenship and suffrage in exchange for Blacks serving in the Union military. By the end of the Civil War, Blacks comprised 10 percent of the Union army.

After the Civil War, Galloway returned to North Carolina. He married Martha Ann Dixon. Their first son, John, was born in 1865. On October 17, 1868, he was elected to the North Carolina state senate as a Republican. The following year he was chosen as a presidential elector, becoming the first Black person to serve in the electoral college.

Many whites in North Carolina reacted violently to the U.S. granting citizenship to African Americans and the right to vote to Black men. Racist groups emerged to violently suppress Blacks. The most notorious of these was the Ku Klux Klan which was infamous for intimidating, maiming and murdering Blacks throughout the South. Galloway reacted to this violence by organizing a local militia (legal under state law) in North Carolina; he was elected Commander of the 1st Regiment defense militia. He actively supported a bill (the Shoffner Act) to create a state militia to combat the Ku Klux Klan.

In 1870 Galloway was elected for a second term to the state senate. His second son, Abraham Jr., was born that year. Later that year, he succumbed to an undiagnosed illness, dying at the young age of 33. His funeral was held in Wilmington, with over 6,000 people in attendance.

Galloway was a self-confident Black man who openly carried a pistol and argued against the use of the N-word. He endured slavery, gained his freedom, and fought for the equality for all men and women in the United States.