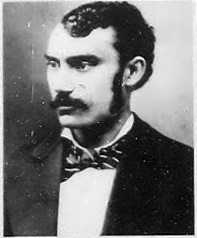 Hale Giddings Parker was a Midwest lawyer and political activist.  He was the only African American appointed a Commissioner (an alternate) at the 1893 World Columbian Exposition in Chicago by President Benjamin Harrison.

Parker was born in Ripley, Ohio, the son of John and Miranda Parker.  His father was a prominent figure in the Underground Railroad and after the Civil War, an inventor, and successful businessman.  Hale Parker entered his father’s employment at the Phoenix Foundry and Machine Shop in his mid-teens and soon learned the trade of finisher and engineer.  He later attended Oberlin University, graduating with honors from the institution in 1873.  Parker’s first job was as a school principal in Madison, Indiana.  While working at the school, he attended the Colored National Convention in Washington, D.C. as a delegate from Indiana in the winter of 1873.

Parker moved to St. Louis in 1878, where he was principal of the Alexandre Dumas school.  He also married Eleanor O. Steele that year.  While working at the Dumas school Parker became the first African American to attend Washington Law School (now Washington University Law School).  He did not graduate.  He did however become a member of the St. Louis Bar in 1885, and began practicing law in the city.  He was soon selected as a delegate to the Missouri State Colored Convention which he thereafter attended nearly every year he lived in the state.  In 1887, Parker became attorney and financial secretary for the St. Louis Colored Orphan’s Home. The 1892, he was an orator at the September Emancipation Celebration in Chicago.  Parker was also instrumental in establishing Provident Hospital in St. Louis in 1894.

Shortly after his appointment as a Commissioner at the World Columbian Exposition, a tumultuous controversy involving African Americans arose when they discovered how few exhibit applications were being accepted from African Americans. It had been anticipated that exhibits at the World’s fair would demonstrate progress made by Negroes since Emancipation.   This perceived injustice by Exposition judges in rejecting applications submitted by African Americans led some black leaders to call for a boycott of the fair while others argued for an exhibit in a Negro Annex that they would themselves sponsor.

Parker opposed both approaches.  While he acknowledged the unfairness of “enemies” in the judging of exhibit applications, he argued against a boycott or separate venue for Negro exhibits stating that “Nothing short of prohibition from the fairgrounds could operate as a valid reason for not exhibiting.” The controversy was never resolved and black visitors often commented on the scarcity of exhibits by African Americans.

In 1894, Parker moved to Chicago where was admitted to the bar and continued his law practice.  His three children thrived in the new environment.   His two daughters, Eleanore and Hortense, graduated from the University of Chicago in 1905 and became public school teachers in the city for the remainder of their lives.  His son, Hale Giddings Parker Jr., practiced dentistry in the city as well.  Parker died in Chicago in 1925.  He was 74.