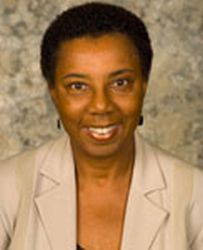 Pearl L. Stewart, freelance journalist and journalism educator was the first African American woman to lead a major daily newspaper when she was hired in 1992 to head the Oakland Tribune. In 2002 she founded the website Black College Wire (blackcollegewire.org), an online news service and training program for journalists in Historically Black Colleges and Universities (HCBUs).

Stewart was five when her parents moved from Camden, Alabama to Rochester, New York. Her father, a school principal, first found work as a bus driver and later as a probation officer. Her mother, a teacher, first worked in a laundry before becoming a social worker. Stewart was one of only five black students in Rochester’s Nazareth Academy, a school of 1,200. Nonetheless, she edited the high school’s paper.  At age 16 she enrolled in Howard University and eventually edited the campus newspaper, The Hilltop, while earning a degree in Afro-American Studies with a minor in journalism. She graduated from Howard in 1971 and earned a master’s degree in communication the following year at American University.

Stewart’s first job was at United Press International in San Francisco as one of two blacks on staff.  From 1976 to 1980 she was a reporter for the Oakland Tribune.  She received death threats after reporting on the internal violence of the Black Panther Party. From 1980 to 1991 she covered Oakland news as a reporter for the San Francisco Chronicle. In 1992 the Tribune‘s new owners chose Stewart as editor because of her deep understanding of local issues. One year later Stewart left the Tribune, citing “differences in style” with a fellow editor. She then took a position as editor of the Chicago Defender.

In 1995 Stewart was a fellow in the Joan Shorenstein Center on the Press, Politics and Public Policy at Harvard University, where she conducted research and wrote on the topics of race and sex-based discrimination in corporate America. From 2000 to 2005 she taught at Florida A & M University’s School of Journalism and Graphic Communication. During that time she founded Black College Wire website with a $200,000.00 grant from the John S. and James L. Knight Foundation. The website fosters communication among HBCU journalism students by linking 22 HBCU student newspapers. BCW also has an internship component, pairing students with top industry journalists.

From 2004 to 2009 Stewart was a writing coach/consultant for The Freedom Forum, a small non-profit website. For two years (2008-2010) she was a writer-editor for The Black Collegian Magazine. Stewart currently is an instructor at Xavier University of Louisiana and a correspondent for Diverse Issues in Higher Education.