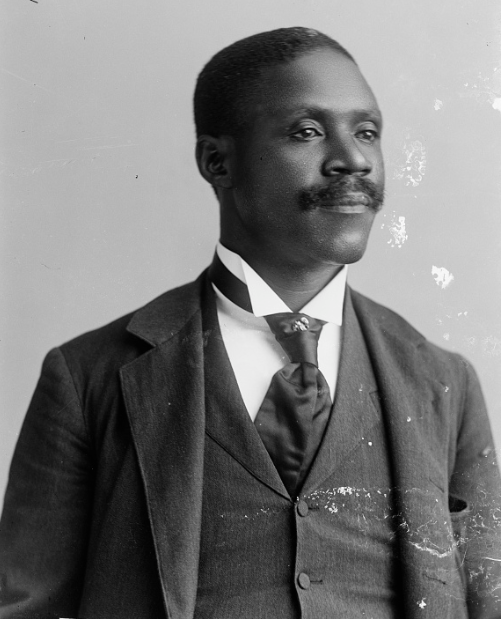 South Carolina Congressman George Washington Murray was born near Rembert, Sumter County, South Carolina, on September 22, 1853 to enslaved parents. He attended public schools, the University of South Carolina, and the State Normal Institute at Columbia, where he graduated in 1876. After graduating, Murray taught school and worked as a lecturer for the Colored Farmers’ Alliance for 15 years. In 1890 he became an inspector of customs at the port of Charleston.  Two years later in 1892, Murray, a Republican, was elected to represent South Carolina’s 7th Congressional District which included Charleston.

Thirty-nine-year-old Murray took his seat in the Fifty-third Congress on March 4, 1893.  He immediately focused his efforts on protecting black voting rights in the South at a time when growing numbers of black voters were being excluded from the polls.  Murray was also a member of the Committee on Education.   He also took a seat on the Committee on Expenditures in the Treasury Department.

While in Congress Murray successfully filed for patents for three inventions.  All three were granted on the same day in April 1894. His inventions were designed to speed up the planting and harvesting process.  They were a furrow opener, a combination stalk-knocker-cultivator, and a marker.  In  June of the same year the U.S. Patent Office approved his application for four more inventions including a fertilizer distributor and a mechanical cotton chopper.

George W. Murray fought Jim Crow laws which undermined the efforts of black people to improve their status.  As a member of Congress he urged funding for the Cotton States and International Exhibition in Atlanta in 1895 to make the white South and the wider nation aware of black achievements. Ironically Booker T. Washington would become famous at that Exposition by criticizing the efforts of African American politicians like Murray to concentrate on voting rights.

In 1894, Murray’s own supporters were subjected to voter fraud and intimidation during his reelection campaign.  The predominately Democratic South Carolina legislature redrew district boundaries to place Murray into the state’s 1st Congressional District.  Murray lost a close election to Democratic candidate William Elliott but he successfully challenged the election results before the U.S. House of Representatives. When Congress finally decided the outcome of the election, Murray was seated and served nine months of the full two year term from June 4, 1896, to March 3, 1897.

Murray’s victory, however, was short-lived as threats to black voting increased with the passage of state laws making more stringent the requirements for residency, poll taxes, property ownership and literacy, all measures designed to discourage African American voting.  Murray lost his House seat in 1896 due to the decreased number of black voters in his district.

After his 1896 defeat George Murray resumed farming and developed a real estate business. By 1900 he had purchased more than nine thousand acres of farmland in Sumter County, South Carolina.  He divided the acreage into small plots and created lease agreements with tenant farmers to grow cotton. By 1902 more than 200 families worked on these plots.  In 1903 however, two of Murray’s tenants claimed he had forged their names on lease agreements.  He was arrested and convicted of forgery in 1905, and sentenced to three years hard labor.

Murry however refused to surrender to state authorities and instead he and his family took a train to Chicago. Once in Illinois he began a successful new career selling life insurance and real estate.  Murray also started a  literary career and to become a professional lecturer.  He wrote two books, Race Ideals: Effects, Cause and Remedy for the Afro-American Race Troubles (1914), and Light in Dark Places (1926) although he remained active in the Illinois Republican Party, Murray was never again elected to public office.  He was however, a delegate to several Republican National Conventions. George Washington Murray died in Chicago on April 21, 1926 in Chicago.  He was 72.