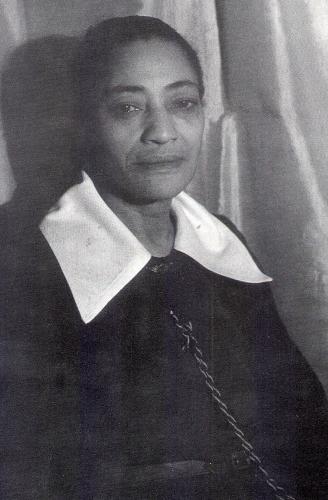 Rose McClendon was an African American actress born in South Carolina in 1884.  McClendon’s original name was Rosalie Virginia Scott.  Her parents were Sandy and Tena Scott.  In 1890 McClendon’s parents worked for a well established family as a housekeeper and coachman in New York City.  McClendon received her education through the public schools in New York where acting became her main focus of interest.

In October 1904 Scott married Henry Pruden McClendon who was trained as a chiropractor but who could only find work as a Pullman porter.  Together they moved from lower Manhattan to Harlem where McClendon was actively involved in the St. Mark’s African Methodist Episcopal Church often using her theatrical talent.

After studying by scholarship at the American Academy of Dramatic Arts between 1916 and 1918, McClendon gave her first stage performance in 1919 in the play Justice.  She would eventually perform in other productions including In Abraham’s Bosom, Porgy and Bess, and Deep River.  Along with McClendon’s acting and directing in 1935 she and Dick Campbell created the Negro People’s Theatre.

McClendon was one of the few black actresses who worked consistently in New York in the 1920s.  She later toured throughout the United States and later in Europe.  She also landed a starring role on the 1934 production of “John Henry, Black River Giant.”  In October of 1935 McClendon was cast as Cora Lewis in Langston Hughes’s long-running play, Mulatto.  McClendon performed in Mulatto 375 times until her death.  On July 12, 1936, Rose McClendon died in her home in New York City from pleurisy and pneumonia.  In 1937 Campbell and Muriel Rahn established the Rose McClendon Players in her honor.