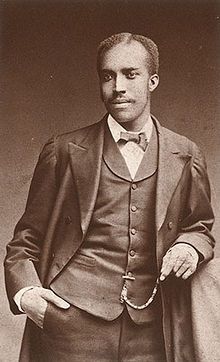 Nathan Francis Mossell was an African American doctor who helped establish the first black hospital in Philadelphia.  Mossell, the son of Aaron and Eliza Bowers Mossell, was born on July 27, 1856 in Hamilton, Ontario, Canada but grew up in Lockport, New York where he owned a successful brickyard.  Mossell and his siblings were the only African American children in the Lockport public schools at the time.  When brickyard revenues began to decline in the late 1860s, the Mossells decided to send only the oldest brother to college.  Nathan, who had working in the brickyard at age nine, attended school sporadically. Soon, after the death of his second oldest brother, Mossell, now fourteen worked in the yard full time to help his father.

At the age of fifteen, however, the family could now afford to provide for Mossell’s education.  In 1871 he enrolled in nearby Lincoln University’s high school preparatory program, completing the four year curriculum in three years.  Four years later, in 1879, he graduated from Lincoln University with a Bachelor of Arts degree, taking second honors in his class and winning the Bradley Medal in natural science.  While at Lincoln, Mossell met his future wife, Gertrude Bustill, with whom he would eventually have four children.  Mossell credited his wife with his decision to attend medical school and to settle in Philadelphia, her home town.

After completing his undergraduate studies Mossell enrolled in the medical school at the University of Pennsylvania.  He graduated in 1882 where he took second honors in his class.  He also became one of Penn’s first African American graduates. Due to the prejudice in most hospitals against African Americans who had completed medical school, Mossell had to intern at St. Thomas and Queen’s College hospitals in London, England.  He continued to work at St. Thomas Hospital for five additional years before returning to Philadelphia.

Soon after his return to the United States, Mossell overcame opposition to become the first African American physician elected to the Philadelphia County Medical Society. He practiced in white Philadelphia hospitals for almost a decade and then decided to start the Frederick Douglass Memorial Hospital and Training School in 1895 partly to provide care for the underserved black Philadelphia community and partly to give younger African American physicians the opportunity to have hospital internships and black nurses to gain hospital experience.  Frederick Douglass Memorial became the second African American hospital in the United States, after Provident Hospital founded in 1892 by Dr. Daniel Hale Williams.  Mossell worked at Douglass as its chief of staff and medical director until his retirement in 1933.  He continued to maintain a private practice in medicine until his death in 1946.

Mossell was also a political activist.  In 1905 he was a founding member of the Niagara Movement which was organized by W.E.B. DuBois to oppose the policies and influence of Booker T. Washington.  Five years later he became a founding member of Philadelphia’s National Association for the Advancement of Colored People (NAACP).